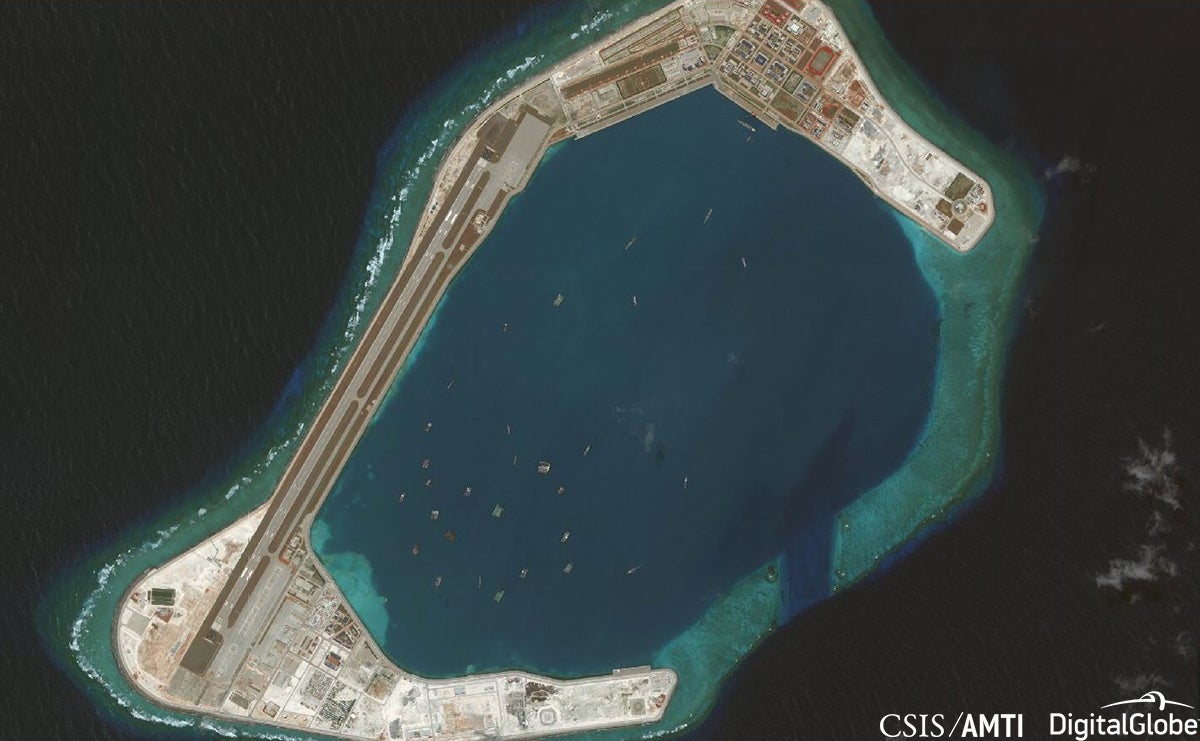 The naval and Coast Guard vessels of the People’s Republic of China (PRC) have consistently drawn attention in the heavily disputed South China Sea, especially with the completion of military bases on artificial islands that China has built on Philippine-claimed reefs in the Spratly archipelago.

What has not often drawn attention is the presence in the region of China’s maritime militia.

While the vessels look like fishing boats, they should not be taken lightly, said Gregory Poling, director of Asia Maritime Transparency Initiative and a fellow at Center for Strategic and International Studies in Washington.

They intimidate the vessels of other claimants in the South China Sea, including the Philippines, Poling said.

“What Beijing has done in the past several years is to establish 24/7 constant presence of naval and Coast Guard vessels, as well as paramilitary militia throughout the South China Sea in a way that was unprecedented just four or five years ago,” Poling told a security forum in Makati City, on Friday.

Despite losing to a Philippine challenge in the UN-backed Permanent Court of Arbitration in July 2016, China insists it owns almost all of the South China Sea, including waters close to the shores of the other claimants in the strategic waterway.

Besides the Philippines, Brunei, Malaysia, Vietnam and Taiwan also claim parts of the South China Sea.

To reinforce its sweeping claim, China has built artificial islands on seven Philippine-claimed reefs in the Spratly archipelago and developed on these military bases equipped with antiship missiles and surface-to-air missiles.

“I mentioned the maritime militia, the paramilitary forces or how we’d like to categorize them. I think we have an impression that this is relatively minor part of the Chinese arsenal, and we are at a mistake,” he said.

Poling presented a satellite image of Philippine-claimed Zamora (international name: Subi) Reef taken in August, showing about 200 boats in the lagoon in just a single day.

The boats are 51 meters long on the average, much larger than the fishing boats of the Philippines and other claimants in the South China Sea.

“None of these boats are actually fishing, everyone appeared as maritime militia. When we tracked them … we never see them doing anything other than intimidating others,” Poling said.

He said the boats often left the lagoon and hanged out around Pagasa (Thitu) Island for days and weeks to intimidate resupply missions to the Philippine-occupied island in the Spratly archipelago.

Pagasa, the largest island occupied by the Philippines in the Spratlys, is located just 22 kilometers from Zamora Reef.

The island, located 280 km northwest of Puerto Princesa City, is a single village, which is part of the municipality of Kalayaan in Palawan.

The seat of government of Kalayaan, Pagasa has an airstrip, a five-bed lying-in clinic and a small elementary school for the children of the islanders.

In its annual report to the US Congress, the Pentagon defines China’s maritime militia as “an armed force of civilians available for mobilization” and the “only government-sanctioned maritime militia in the world.”

The work conducted by the People’s Armed Forces Maritime Militia (PAFMM) allowed China to pursue its objectives in the disputed waters without risking conflict, the report said.

“In the South China Sea, the PAFMM play a major role in coercive activities to achieve China’s political goals without fighting, part of broader PRC military doctrine stating confrontational operations short of war can be an effective means of accomplishing political objectives,” it said.

“In the past, the PAFMM rented fishing vessels from companies or individual fishermen, but China has built a state-owned fishing fleet for at least part of its maritime militia force in the South China Sea,” the report added.

The Pentagon said some of the incidents in which the militia played a significant role were the 2012 standoff with the Philippine Navy and Philippine Coast Guard at Panatag (Scarborough) Shoal, large surge of ships near the Senkakus in 2016 and the patrol of Sandy Cay near Pagasa in August last year.