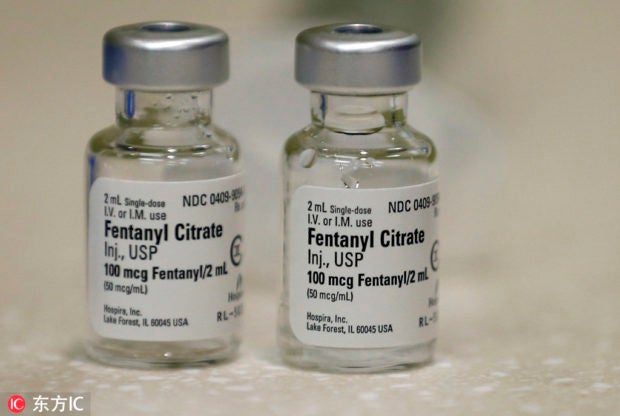 China and the United States agree to enhance cooperation on law enforcement and to combat illicit drugs, including the synthetic drug fentanyl. AP FILE PHOTO

BEIJING — China’s announcement that it will expand control of fentanyl and related substances will further reduce the risks of illegal production, abuse and smuggling, a narcotics-control expert said.

Currently, more than 20 derivatives of the opioid are strictly controlled in China, including their production, use, import and export, said Chen Shuaifeng, an associate professor of narcotics control at the People’s Public Security University of China.

That list will be expanded to cover all related substances, and also any new ones that are developed.

“There is always a time lag between the creation of a new substance and it being put onto the controlled substances list,” Chen said. “But including all fentanyl derivatives on the controlled list means once a new derivative is produced in the lab it is immediately deemed under control, so it cannot be used or produced illegally.”

Some of the synthetic drugs are used as effective pain killers in hospitals, but they also have serious side effects such as suppressing respiration, and are used as psychoactive drugs, said Huang Yuguang, head of Peking Union Medical College Hospital’s anesthesia department.

Geng Shuang, spokesman for the Ministry of Foreign Affairs, said at a news conference last month that China has also been intensifying information sharing with other countries, including the United States, in fighting the illegal trade in fentanyl.

Most fentanyl and other psychoactive substances available in the market are designed in labs in developed countries, including the US, which are also major markets for their consumption, Geng said.

The US has been accusing China of being a major source of fentanyl, but has never provided accurate data or effective evidence to prove that, he said.

Wang Xuehai, chairman of Humanwell Healthcare, based in Wuhan, Hubei province, said China has been imposing the strictest control on fentanyl, and at present it can only be used in injections, and no oral products have been approved in China.

The company is a major producer of fentanyl in China, with products exported to countries including Sri Lanka, the Philippines and Turkey.

“Humanwell has not exported fentanyl to the US,” he said.

Huang said fentanyl is one of the opioids that is under the strictest supervision in Chinese hospitals.

For example, at Peking Union Medical College Hospital, a prescription for the drug must include detailed information about the patient, including his or her name, gender, identification card number, employer’s name, and information on the quantity and specification of the drugs prescribed.