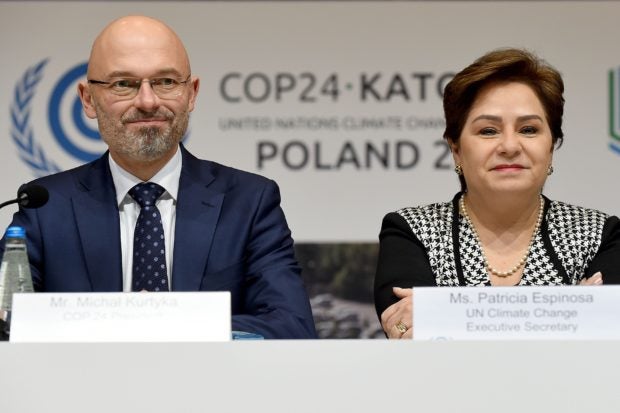 Polish Secretary of State in the Ministry of Environment, Government Plenipotentiary for COP24 Presidency, Michal Kurtyka (L) and Mexican Executive Secretary of United Nations Framework Convention on Climate Change Patricia Espinosa (R) give a press conference during the 24th Conference of the Parties to the United Nations Framework Convention on Climate Change (COP24) summit on December 2, 2018 in Katowice, Poland. – Representatives from nearly 200 countries began crunch UN climate talks in Poland against a backdrop of dire environmental warnings and a call for action against the “urgent” threats posed by climate change. (Photo by Janek SKARZYNSKI / AFP)

KATOWICE, Poland — As delegates from around 200 countries convened on Sunday for the start of UN climate talks, civil society organizations reminded negotiators that their discussions should revolve around people and the planet.

Set in this city built around mining coal, the 24th Conference of the Parties (COP24) to the UN Framework Convention on Climate Change is expected to come out with a rule book on the Paris Agreement, a landmark accord in 2015 that set a goal of keeping global warming well below 2 degrees Celsius.

While the Polish government claims Katowice is in the process of transforming into a green city, power plant chimneys pumped plumes of smoke into a dull December sky and monitoring sites showed elevated levels of air pollution.

Poland, which is presiding over the meeting, plans to use Monday’s official opening event to promote a declaration calling for a “just transition” for fossil fuel industries that face cuts and closures amid efforts to reduce greenhouse gas emissions.

Environmental activists have expressed concerns about the nonbinding declaration, arguing that it could be cited as justification for propping up dying industries instead of investing in renewable energy sources.

Some have also questioned why coal companies are among the meeting’s sponsors.

Harjeet Singh, who leads the climate advocacy of ActionAid, said the high-level summit should be ultimately about helping and protecting people, particularly the most vulnerable to the adverse impact of a rapidly warming world.

“These talks have been embroiled with blame game and had largely shifted away from the main goal of the convention and the Paris Agreement, which is people and planet,” Singh said in an interview.

Heated debates are expected to dominate the two-week climate talks, considered the most important negotiations after the successful COP21 in Paris.

Political divides between rich and poor countries are also expected to emerge during the negotiations, particularly on issues such as climate finance.

The World Bank on Monday said it was doubling funding for poor countries preparing for climate change to $200 billion over five years.

It said about $50 billion would be earmarked for climate adaptation, a recognition that some adverse effects of global warming could not be avoided anymore but required a change in practice.

Amid worsening climate-related events, such as stronger typhoons and harsher droughts, Singh said loss and damage could no longer be set aside in the talks, much less in the rule book.

Loss and damage refer to the irreversible effects of climate change, including loss of lives and threats to biodiversity.

Expectations are high that loss and damage would be seriously tackled in COP24, particularly since the Warsaw International Mechanism was established during COP19 in Warsaw, five years ago, to address loss and damage associated with climate change.

“Loss and damage cannot be a bargaining chip here … We have no option but to have it [in the rule book],” Singh added.

COP24 received a boost over the weekend when 19 major economies at the G-20 summit affirmed their commitment to the Paris accord. The only holdout was the United States, which announced under President Donald Trump that it was withdrawing from the climate pact.

While the United States is withdrawing from the climate pact, the US Department of State said it was sending a delegation to the Katowice conference.

The Philippine delegation at COP24 said it would continue to champion climate justice in the two-week talks.

Secretary Emmanuel de Guzman, vice chair of the Climate Change Commission, said the Philippine delegation would remain “constant and persistent” in its call for scaled-up, adequate and predictable financial support of developed countries to developing nations.

Not far from the meeting venue, Polish anticoal activists held a small protest on Sunday. It was dwarfed by marches in Brussels, Berlin and Cologne over the weekend calling for greater action to curb climate change. —With a report from AP