China eyes Manila Trench as possible site for its underwater base 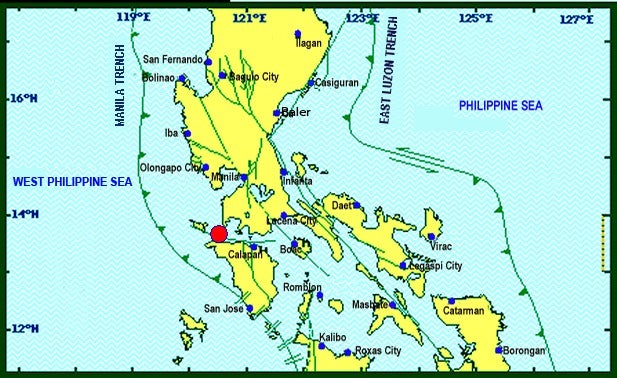 The Manila Trench is about 60 to 120 kilometers from the west coast of Luzon.

The Manila Trench, an oceanographic feature situated within the Philippines’ exclusive economic zone (EEZ), is one of the locations being eyed by China for its proposed underwater base in the South China Sea.

The Hong Kong daily newspaper South China Morning Post reported early this week that China is considering to build an underwater sea base, dubbed as AI Atlantis, in the hotly-contested waterway, for its unmanned submarine science and defense operations.

“The project – named in part after Hades, the underworld of Greek mythology – was launched at the Chinese Academy of Sciences in Beijing this month after a visit to a deep sea research institute at Sanya, Hainan province, by Chinese President Xi Jinping in April,” the report said.

The ambitious project, seen as “the first artificial intelligence colony on Earth,” is estimated to cost Chinese taxpayers $160 million.

Professor Yan Pin, an academy researcher with the Key Laboratory of Ocean and Marginal Sea Geology from the Chinese Academy of Sciences in Guangzhou, told the news agency that the Manila Trench is one of the candidate locations for the underwater base because its depth exceeds 5,000 meters, which appears to be suited for the project requirement.

But the trench, located where the Eurasian and Pacific tectonic plates meet, is also one of the world’s biggest quake zones, Yan said.

A massive earthquake could trigger a tsunami as high as four meters towards the Pearl River Delta Area, including Hong Kong, within three hours, he pointed out.

Part of the project includes underwater docking platforms and robot submarines to survey the seabed. China would operate the base in the South China Sea, where they have built huge, artificial military outposts in recent years.

The Manila Trench, which is closer than Scarborough Shoal (Panatag Shoal) to the country’s nearest landmass, was the site of a tense stand-off between the Philippines and China two years ago. It was the incident that prompted the former to file a maritime case in the international court in 2013. The ruling, which invalidated the Asian superpower’s massive sea claims, was never acknowledged by China.

While Yan admitted it was “politically sensitive” that the base could be built near the disputed shoal, he said both countries should discuss the project and its potential benefits.

“China and the Philippines should sit down and discuss it. A tsunami [warning] is a big selling point. Data collected by the station would benefit all countries in the region. It could save many lives,” he was quoted as saying in the report.

The project was reportedly the outcome of Xi’s visit to the research institute in Hainan last April, urging them “to dare to do something that has never been done before.”

“There is no road in the deep sea, we do not need to chase [after other countries], we are the road,” he said.

The President was also quoted as saying that China was a big ocean country with vast claimed waters, and there was a “march into the ocean to accelerate the build-up of maritime power.”

Maritime law expert Jay Batongbacal said the Philippines should question China’s latest actions, especially that the proposed project is within the country’s EEZ.

“We should be watching this carefully because they have demonstrated that they are willing to do these things regardless of what we say. So we can’t just let this pass without necessary inquiry or statement of concern. At this point, there should be request or demand for more transparency, if ever,” he told Inquirer.net by phone on Wednesday.

“We should emphasize that this area they are contemplating is within our EEZ — within our jurisdiction for both purposes of research and resource exploration, as well as marine scientific research. We should insist on that,” he said.

The Manila Trench is also situated on the outer edge of China’s nine-dash line, which should also be of concern of the Philippines: “In a way this is another means by which they are trying to demonstrate their exercise of civilian jurisdiction over the area. So if they’re gonna do this without our permission or consent of operation, then it’s basically an extension of their efforts to demonstrate jurisdiction of the entire area of the nine-dash line.”

While China presents it as a scientific endeavor, the expert warned that the project still has military aspects to achieve maritime domain awareness in the underwater territory.

“This is all part of China’s grand plan to achieve a leading position in marine scientific research worldwide. Part of this effort to this is to conduct all of this very generous marine science research work and also the data and information in the oceans, it has both scientific purposes and can also be employed for military purposes, he said.

“An underwater base in Manila Trench raises eyebrows, because obviously while they may be doing work, say exploring the area, the thinking of course is it will contribute to their maritime domain awareness in the underwater realm,” he added.

Batongbacal also does not see anything significantly beneficial for the Philippines from the project for now.

“I don’t see any particular tangible benefits for the Philippines. We should not just agree to this, there should be something in it for us. But based on that article, there seems to be none,” he said.  /muf