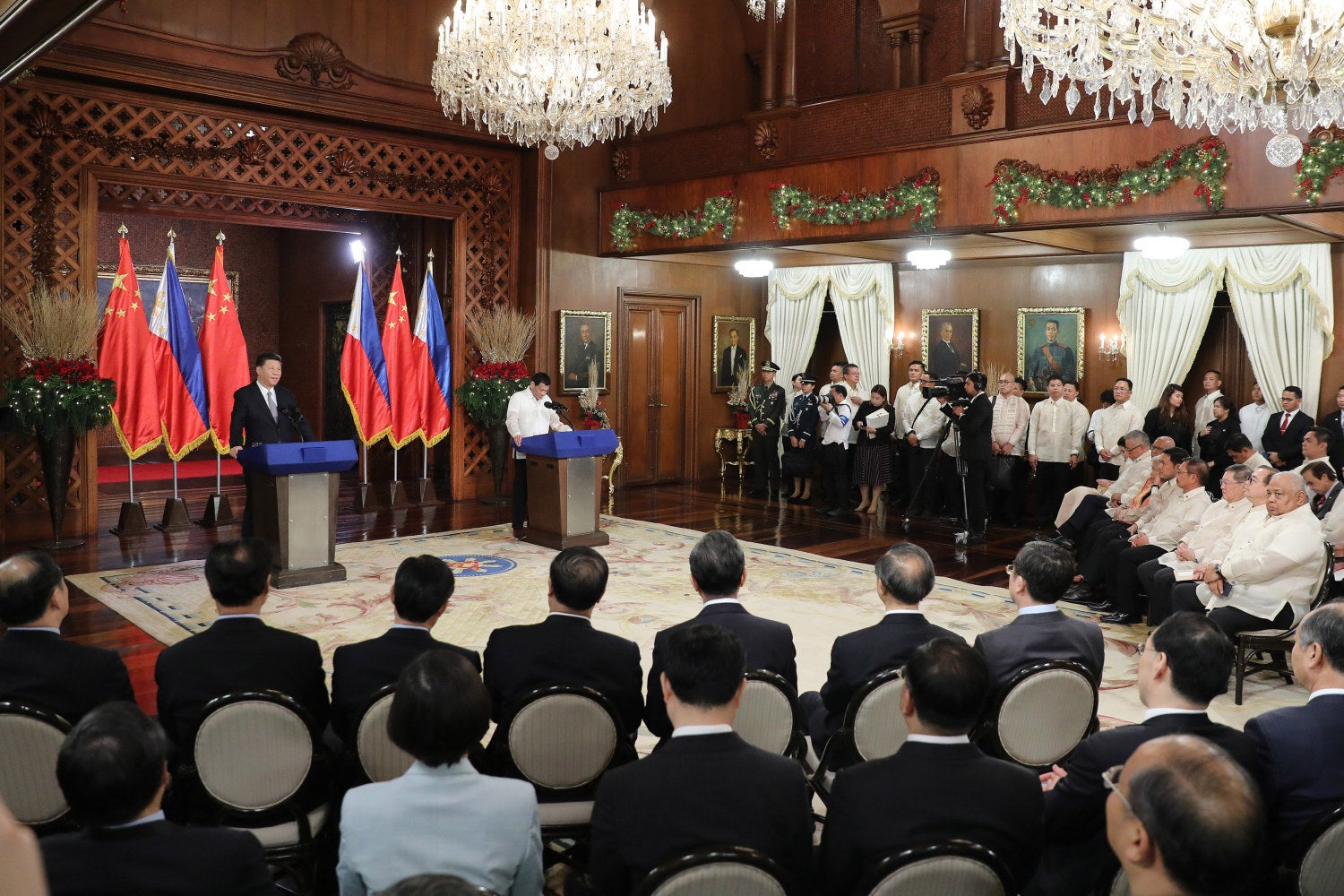 Chinese President Xi Jinping on Tuesday vowed to push for friendship and cooperation in the South China Sea and batted for a “maritime mechanism” to ease tensions in the heavily disputed waters when he met with the leaders of Congress, who sought to establish warm relations with the Asian economic and military powerhouse.

Xi told the congressional leaders that he wanted to turn the South China Sea into a “sea of peace, friendship and cooperation,” according to Senate Majority Leader Juan Miguel Zubiri.

The meeting between Xi and the Filipino lawmakers was held at Shangri-la Hotel in Taguig City, where the Chinese leader stayed during his two-day state visit.

The Chinese leader stressed that he wanted more people-to-people cooperation, as he bared plans to bring more Chinese tourists to the Philippines and accept more Filipino teachers and nurses to China, Zubiri said.

Xi also underscored the shared ancestry between the Chinese and the Filipinos, Zubiri added.

None of the congressional leaders brought up the arbitral ruling that invalidated China’s claim to nearly the entire South China Sea during the meeting, according to Zubiri, who said it was a matter to be discussed during one-on-one meetings between the leaders or by subcommittees.

“It’s not for us to take up because we don’t want to ruffle feathers at this point in time, of a very historic visit of the Chinese president in our country,” Zubiri told reporters.

Senate President Vicente Sotto III led the senators in welcoming the Chinese leader and said he was looking forward to having a “common strategic cooperation with China.”

The House of Representatives contingent was headed by Speaker Gloria Macapagal-Arroyo.

Sotto said he mentioned the importance of good diplomatic relations between the Philippines and China, and stressed that there was more that bound the two countries than what divided them.

Zubiri said Xi shared his talks with President Duterte about the South China Sea, the point of contention between Manila and Beijing because of the latter’s sweeping claim that included swaths of the West Philippine Sea, waters within the country’s 370-kilometer exclusive economic zone (EEZ).

“[Xi] mentioned that he had a good discussion with President Duterte. He promised that the focus will be on cooperation and friendship and not the controversial issues,” he said.

Xi, according to Zubiri, wanted to set up a “maritime mechanism,” which would serve as a liaison between the Philippines and China to push for this cooperation and friendship.

“So fishermen going there won’t be harassed. If there are problems between merchant vessels from the Philippines and China, there is an automatic mechanism, a liaison to resolve it immediately so there won’t be tensions,”  Zubiri said.

He was referring to China’s proposal for a “maritime and air liaison mechanism,” an arrangement for forces of the two countries to coordinate their naval and aircraft movements to prevent incidents in the contested waters.

But the proposal had been opposed by Philippine defense officials, The Associated Press (AP) reported, quoting two Filipino officials.

There was no mention of the proposal after Tuesday’s meeting between Xi and President Duterte, AP said.

Filipino nationalists have warned that any agreement that can undermine the Philippines’ internationally recognized exclusive rights to fish and exploit resources within its EEZ would violate the Constitution, it said.

Xi also thanked the Senate and the House of Representatives for pushing for a peaceful resolution to the South China Sea issue.

Zubiri said there was no specific discussion on the joint exploration deal between the Philippines and China, but he was supportive of the idea.

“It’s a win-win solution. Right now, I think we’re in the golden age once again of Philippine-Chinese friendships and relationships. I think we should tap that idea, that we should focus on cooperation and friendship and trade between China and the Philippines,” he said.

This is better than picking fights and making derogatory statements that would hurt  diplomatic relations between the two countries, he added.

Arroyo, a former President of the Philippines, did not mention the South China Sea dispute.

Instead, she spoke about the role of the House in improving the country’s financial resources and public infrastructure “to help maximize the benefits of increased joint activity with China.”

The Speaker’s office provided a copy of her speech, but did not give details of specific issues discussed during the 30-minute meeting with Xi.

Arroyo praised China for the success of its economic and political reforms in the past four decades, saying such feat would have taken other countries two centuries to accomplish.

She also thanked Xi for China’s support for the Philippines and his good relationship with President Duterte, who is often pilloried for his decision to go soft on China on the South China Sea dispute. —With reports from Marlon Ramos and AP