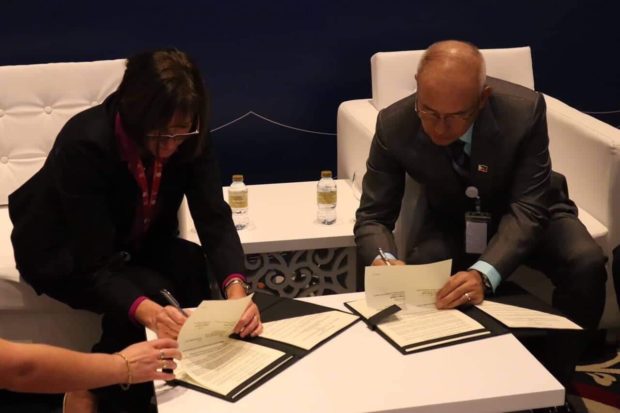 The Philippine National Police (PNP) and the National Crime Agency (NCA) of the United Kingdom of Great Britain and Northern Ireland will boost its cooperation and exchange of information in battling serious and organized crimes.

PNP chief Director General Oscar Albayalde and Lynne Owens, Director General of the UK’s NCA, signed on Monday a Memorandum of Understanding (MOU) to boost the cooperation between the two agencies.

The officials signed the MOU on the sidelines of the 87th International Police Organization General Assembly in Dubai, United Arab Emirates, where Albayalde led the Philippine delegation.

A copy of the MOU obtained by INQUIRER.net on Tuesday said the agreement aims to “assist in the prevention, detection or investigation of serious and/or organized crime and aid in collaborative efforts in the interest of public protection.”

The MOU covers serious and organized crimes including but not limited to sexual abuse, human trafficking, facilitation of illegal migrants, cybercrime, economic crimes, smuggling of counterfeit commodities, illegal trafficking of firearms and explosives and endangered species.

Provision of training and exchange of professional knowledge and skills, equipment, and personnel are covered by the MOU.

The NCA may also provide equipment, training, and occasional funding to the PNP to enhance capability in conducting investigations in accordance to the memorandum, the document read.

The agencies, however, will only exchange information consistent with the requirements of domestic and international laws.

PNP Spokesperson Chief Supt. Benigno Durana Jr. said cooperation between the two countries already existed in the past, although the partnership mostly focused on efforts to counter terrorism.

Durana said the MOU will largely benefit the PNP as it will improve the capacities of the national police force. “They can learn from us, we can learn from them,” he said.  /muf