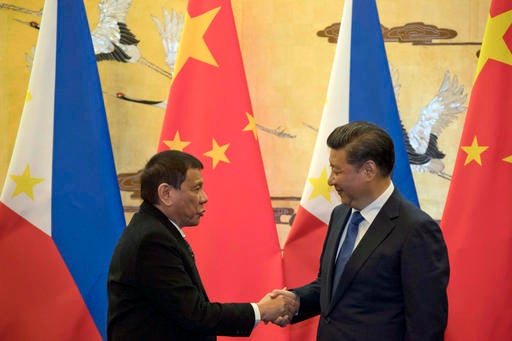 Philippine President Rodrigo Duterte, left, and Chinese President Xi Jinping shake hands after a signing ceremony in Beijing, China, Thursday, Oct. 20, 2016. Duterte was meeting Thursday with Xi in Beijing as part of a charm offensive aimed at seeking trade and support from the Asian giant by setting aside a thorny territorial dispute. (Pool photo by NG HAN GUAN via AP)

Sen. JV Ejercito said he hoped that President Rodrigo Duterte would discuss matters related to the West Philippine and the country’s illegal drug problem with his Chinese President Xi Jinping, who is scheduled to make a two-day visit to Philippines, starting Tuesday.

Xi’s visit would be his first in the Philippines under the Duterte administration.

READ: Duterte, Xi to meet in Manila for the first time

Ejercito told reporters on Monday that the two leaders should discuss the freedom of navigation over the disputed waters of the West Philippine Sea.

[I hope the issue of freedom of navigation in the West Philippine Sea, which I know is controversial, can be clarified because that causes instabiliity, that would affect also our business climate. We are the most affect, because the area that we are claiming is what China is getting.]

Ejercito also noted that China should help the Philippines in addressing the source of illegal drugs that enter the country as most of the drug shipments are brought in from China.

“I think after almost three years of war against drugs, andiyan pa rin eh [it’s still there],” he said. “So talagang [really] we have to address the source. Yan ang problema [That’s the problem].”

“Kung talagang kaibigan sila [If the Chinese are really friends], they should help us cut the source,” he added. “Eh karamihan naman nahuhuli sa Chinese o mga mainland Chinese. [Most of those caught are Chinese or mainland Chinese].”

The senator said that China should also be “transparent” in its aid on infrastructure projects in the country.

[We have to clarify if their overseas development assistance is as friendly as that of Japan, because so many, like me, are worried.]

“I’m one of those that are really pushing infrastructure projects and transport modernization,” he added.

[On the Japan side, I can really see that the packages if friend. On the China side, they have to be transparent also. I hope there are no strings attached.] /atm