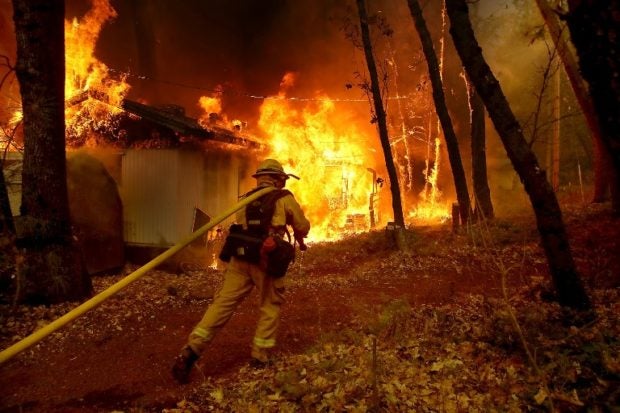 A Cal Fire firefighter pulls a hose towards a burning home as the Camp Fire moves through the area on November 9, 2018 in Magalia, California. Justin Sullivan/Getty Images/AFP

At least one Filipino lost his home in one of the California wildfires as Philippine officials continue to monitor the Camp Fire and Woolsey Fire, the Department of Foreign Affairs (DFA) said.

READ: Death toll rises to 76 in California fire; 1,300 unaccounted for

In a statement issued on Sunday, the DFA said that together with the Philippine Consulates General in San Francisco and Los Angeles, it is continuously monitoring the wildfires in Northern California which “claimed the lives of at least 71 persons and left more than 1,000 unaccounted for.”

According to Consul General Bensurto, at least one Filipino in Butte County in San Francisco lost his home in the fire.

Bensurto and Consul General Adel Angelito Cruz said that “there have been so far no reports of any Filipino fatality in both fires,” the DFA added.

The DFA further noted that Bensurto and Cruz are coordinating with relevant authorities and the Filipino community to see if there are Filipinos among the dead and missing.

There are approximately 2,500 members of the Filipino community in Butte County in San Francisco, and 25,879 in Ventura County in Los Angeles, the DFA said.

The DFA also reminded the Filipino community to call +1 415-748-9888 in San Francisco or +1 (213) 268-9990 in Los Angeles if they have any information on any Filipinos who may be unaccounted for or who may require consular assistance. /je