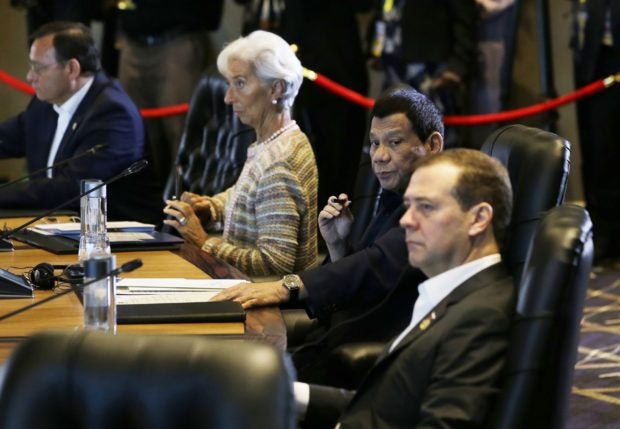 President Rodrigo Duterte ended up completing his participation in the two-day Asia-Pacific Economic Cooperation (Apec) Leaders’ Meeting in Papua New Guinea, contrary to an earlier Malacañang announcement that he would be departing a day early.

The Philippine leader spent another day in Port Moresby to take part in major Apec events, including a photo op, a lunch meeting, and retreat with 20 other world leaders.

Malacañang did not immediately explain what prompted the President’s apparent change of mind.

He was earlier announced to be leaving on Saturday evening, skipping some of the most important Apec meetings on Sunday.

Instead, his spokesperson and chief legal counsel, Salvador Panelo, issued a statement on Sunday congratulating the President on his contributions during the meetings.

“With the President’s undiminished dedication to our country’s economic progress and the formidable support he was able to solicit from the respective leaders of the Apec community, we are enthusiastic to say that this trip not only benefited our country today but also its overall economy in the following years,” he said.

The President passed on a gala dinner at the summit, days after skipping key meetings in another gathering of world leaders for a “power nap.”

The mercurial leader, who has a well-known disdain for stiff diplomatic gatherings, was a no-show on Saturday night, sending his trade secretary instead to pose with heads of state donning bright yellow and red Papua New Guinean shirts.

He, however, showed up at the convention center on Sunday.

“This after I loudly and naggingly insisted he stay just one day. ONE DAY, I stressed,” Foreign Secretary Teodoro Locsin Jr. tweeted on Sunday.

The absence of the 73-year-old President at diplomatic gatherings has sparked criticism and speculation of ill health, which Panelo denied, saying the President merely lacked sleep.

The President has said previously that he suffers from daily migraines and ailments including Buerger’s disease, an illness that affects the veins and the arteries of the limbs, and is usually due to smoking.

Panelo said the President had a “fruitful and productive participation” in Apec, including a dialogue during the summit of chief executive officers of the Apec Business Advisory Council, a meeting with leaders of the Pacific Islands Forum, and a dialogue with the International Monetary Fund.

In the meetings, the President “actively engaged in important discussions and advanced our country’s priorities in what we consider as the most important economic cooperation platform in the world,” Panelo said.

The President “affirmed his commitment to continuously take part in and contribute to the Apec Forum, underscoring that the Philippine trade with Apec economies comprise 84 percent of the country’s total trade worldwide,” he said.

The President also met with members of the Filipino community in Papua New Guinea.

Close to 40,000 Filipinos and more than 200 Philippine companies operate in the Pacific nation bordering Indonesia and north of Australia.