Duterte skips 4 events but attends 4 others 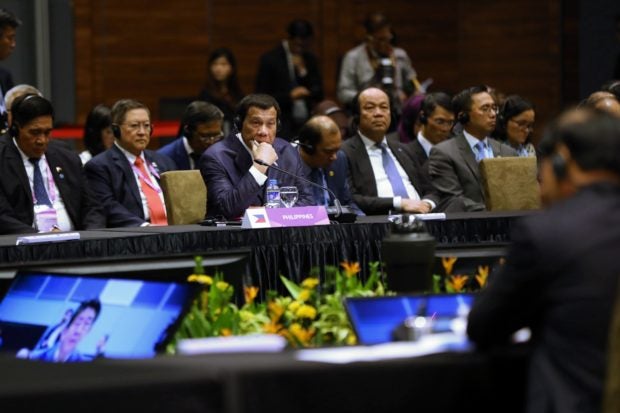 SINGAPORE — President Rodrigo Duterte missed four events on the second day of the 33rd Association of Southeast Asian Nations (Asean) Summit because he “took power naps,” according to Malacañang.

He arrived at Suntec Singapore International Convention and Exhibition Center after 9:30 a.m., an hour late but in time for the 21st Asean-China Summit.

The event was closed to the media.

The President skipped the next event, the 20th Asean-Republic of Korea Summit and the event after that, a working lunch hosted by Singapore Prime Minister Lee Hsien Loong for the Asean leaders.

The President was also absent from the 2nd Regional Comprehensive Economic Partnership Summit in the afternoon.

Foreign Secretary Teodoro Locsin Jr. represented him at the meetings.

Presidential spokesperson Salvador Panelo issued a statement on Wednesday night, explaining that the President “took power naps to catch on sleep” during the events that he did not attend.

The President attended three other events, including the 3rd Asean-Russia Summit, after which he met briefly with Lee.