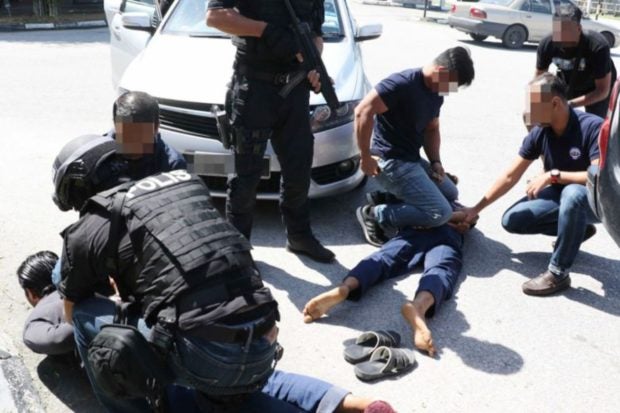 The five arrested comprised two Malaysians, a Pakistani, an Egyptian and a Middle Eastern man. They were detained in Selangor, Perak, Kuala Lumpur and Sabah by counterterrorism officers during an operation last month. PHOTO from MALAYSIA POLICE SPECIAL BRANCH via The Straits Times/Asia News Network

National police chief Mohamad Fuzi Harun said the five held comprised two Malaysians, a Pakistani, an Egyptian and a Middle Eastern man. They were detained in Selangor, Perak, Kuala Lumpur and Sabah by counter-terrorism officers during the operation from Oct 13 to Oct 26.

The two Malaysians – a man and a woman – had allegedly channelled funds to their compatriot, Muhammad Wanndy Mohamed Jedi, the Islamic State in Iraq and Syria (ISIS) recruiter killed in a drone strike in Raqqa last year.

The 32-year-old woman arrested in Kuala Lumpur on Oct 25 had allegedly moved money to Wanndy between 2014 and 2017.

The 40-year-old service manager from Sabah was held on Oct 26, also for allegedly channelling funds to Wanndy and the latter’s would-be successor, Muhamad Fudhail Omar, who was also killed in Syria last year.

He is also alleged to have helped fund the Filipino militant group Abu Sayyaf since 2015. Abu Sayyaf is notorious for demanding ransom after abducting people off the coast of Sabah, which faces the southern Philippines.

Tan Sri Mohamad Fuzi said the Egyptian suspect had worked in Kuala Lumpur. “The first suspect is a 50-year-old Egyptian working as an executive manager in a Kuala Lumpur firm, and was detained in Selangor on Oct 13.

“The suspect was an Al-Qaeda member while in Afghanistan from 1988 to 1993. He had met Osama bin Laden,” he added.

The Egyptian had used fake travel documents to enter Canada and Azerbaijan, as well as Pakistan, and has been previously arrested in Canada and Egypt for the same offense.

According to Inspector-General Mohamad Fuzi, the other two foreigners were apprehended on Oct 20 and Oct 25, respectively.

The 31-year-old Middle Easterner was intercepted at the Kuala Lumpur International Airport. “He had issued a death threat against a foreign diplomat in Kuala Lumpur and is suspected (of) involvement in terrorism,” the police chief said.

The Pakistani, a 31-year-old laborer, was taken into custody in the town of Sitiawan, Perak, after police discovered his involvement in Lashkar-e-Taiba, one of the largest and most active Islamist terror groups in South Asia, mainly operating in Pakistan. The trained militant has been in Malaysia since 2016.

Malaysia has arrested more than 420 terror suspects since 2013, and foiled plots aimed largely at launching attacks locally. The country’s first and only terrorist attack took place in June 2016, when two men on a motorcycle lobbed a grenade into a nightclub in Selangor, injuring eight people. The men were sentenced to 25 years’ jail.