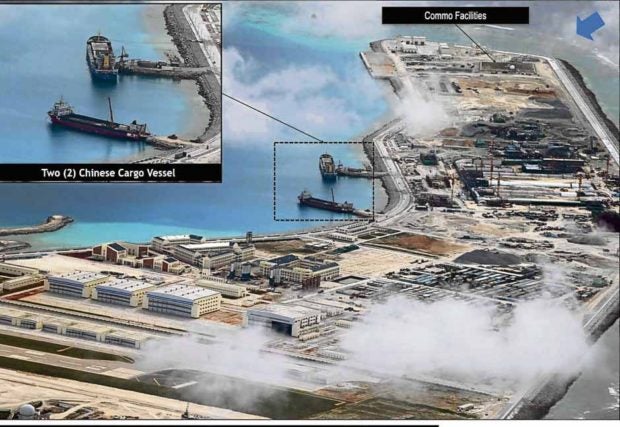 MILITARY WEATHER WATCH Two Chinese cargo vessels are seen on Philippine-claimed Zamora Reef, where China has set up a weather observation station that it admits can be used for military purposes.—CONTRIBUTED PHOTO

A maritime law expert on Monday urged the government to question China’s weather observation stations on three Philippine-claimed reefs in the Spratly archipelago, saying the installations could be used for military purposes.

Jay Batongbacal, director of the University of the Philippines Institute for Maritime Affairs and Law of the Sea, voiced doubt about China’s claim that the stations would be used to “provide public service” to nations in the region.

The Hong Kong daily newspaper South China Morning Post (SCMP) reported on Thursday that China had opened weather observation stations on Fiery Cross, Subi and Mischief reefs in the Spratly group of islands in the middle of the South China Sea.

The three maritime features are claimed by the Philippines, where they are known as Kagitingan, Zamora and Panganiban reefs, respectively, but China has seized them and converted them into artificial islands.

“Weather stations on military bases also serve the purpose of the military base,” Batongbacal told the Inquirer by phone on Monday.

All military bases in the world have weather stations, he said.

China does not deny that the weather stations could be used for military purposes, but SCMP quoted Lu Kang, spokesperson for China’s foreign ministry, as telling a press briefing in Beijing that the posts would mainly be used to ensure navigational safety in the South China Sea.

Data collected by the stations will be used to provide more precise weather forecasts for the crews of fishing vessels and other ships in the region, the SCMP report said.

He said claiming the weather stations were for the public good was China’s way of masking the military purpose of its building artificial islands in the South China Sea.

“It’s China’s charm offensive. It is trying to present to the region a softer face, a softer China,” Batongbacal said.

The Philippines should question the establishment of the weather stations, he said.

“For the common good is only incidental,” he said, “and a way for [China] to avoid protests and opposition from other countries.”

Beijing claims nearly the entire South China Sea, one of the world’s busiest waterways where $5 trillion in global trade passes every year.

Brunei, Malaysia, the Philippines, Vietnam and Taiwan dispute China’s claim and have overlapping stakes in the South China Sea.

The Philippines won a challenge to China’s sweeping claim in the UN-backed Permanent Court of Arbitration in The Hague on July 12, 2016.

The court declared China’s claim invalid and ruled that it had violated the Philippines’ sovereign rights to fish and explore for resources in the West Philippine Sea, waters within the country’s 370-kilometer exclusive economic zone in the South China Sea.

China ignored the ruling and proceeded to build artificial islands on seven Philippine-claimed reefs in the Spratlys where it later built bases from which to project its military might across the region.

President Rodrigo Duterte, who came to office two weeks before the decision came down, set aside the arbitral ruling in exchange for aid, loans and investments from China.

Malacañang, however, said on Monday that the “right time” would come for the President to raise the ruling with China.

“We will have to leave it to the President’s judgment on when and where the perfect time would be made,” presidential spokesperson Salvador Panelo said.

The Department of Foreign Affairs (DFA) said on Monday that it would “verify the reported establishment” of weather observation stations on Philippine-claimed reefs.

“The department will take the appropriate action should these reports be validated,” the DFA said in a statement. —With reports from Julie M. Aurelio and Dona Z. Pazzibugan