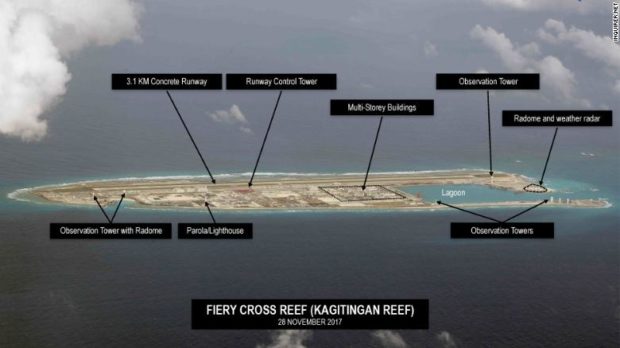 China has started operating weather monitoring stations on its artificial outposts in the Spratly Islands in the West Philippine Sea as a probable diversion from its continued militarization of disputed waters in the South China Sea, an analyst has said.

“By shifting back to the ‘public goods’ narrative, China is attempting to draw attention from its continued enhancement of military facilities on its features in the South China Sea, and trying to court smaller Southeast Asian states by casting the US and external powers as military troublemakers while China is a good international citizen offering public goods,” he told Inquirer.net.

Foreign Ministry spokesperson Lu Kang said in a press conference last week that China has started operating a maritime observation center, a meteorological and air quality monitoring station on reefs in the Spratlys, known to China as Nansha Islands.

The South China Sea, one of the most contested waters in the world, is claimed by China, the Philippines, Vietnam, Taiwan, Malaysia and Brunei.

A separate report from South China Morning Post said that the stations are located on the three biggest artificial outposts in the Spratlys: Kagitingan (Fiery Cross), Panganiban (Mischief), and Zamora (Subi).

He also said they wanted to “improve civil services and provide public goods and services to countries in this region.”

“This is what we primarily wanted to achieve when we started these works on the islands and reefs in the south China Sea, and it is also a solemn pledge China has made to countries in the region and to the international community,” he said.

China insists that the facilities on its man-made islands in the Spratlys are primarily for civilian purposes, despite reports about its deployment of military planes and surface-to-air missiles on the islands earlier this year.

Analysts say that the missile shelters, runways, ports, aircraft hangars on the islands make it clear that islands are military installations and definitely not for civilian use.

Defense Secretary Delfin Lorenzana, meanwhile, said he would reserve his comments until he receives “definitive information” from their intelligence units which are evaluating the weather stations. /cbb

Read Next
Sister Patricia Fox arrives in Australia, slams PH rights abuses
EDITORS' PICK
The Najima Drive: Nissan’s MD drives #GoAnywhere adventures in new video series
Can Your Brand of Meat Be Trusted? Here’s How to Know You’re Eating Safe Meat
Can travel make you fall in love?
Xi’s early involvement in virus outbreak raises questions
COVID-19 screening checkpoints remain for those going to Boracay
COVID-19 has infected more than 69,000 people globally
MOST READ
2,000 iPhones given for free by Japanese gov’t to passengers stuck on ship due to coronavirus
WATCH: Sarah Geronimo dances ‘fierce’ version of ‘Tala’
Duterte can be greatest President yet – Joma Sison
Poe to solons: If ABS-CBN franchise deemed extended, put it in writing or declare it
Don't miss out on the latest news and information.

Poe to solons: If ABS-CBN franchise deemed extended, put it in writing or declare it

Sleeping with your partner’s T-shirt could improve sleep as much as melatonin supplements, says study