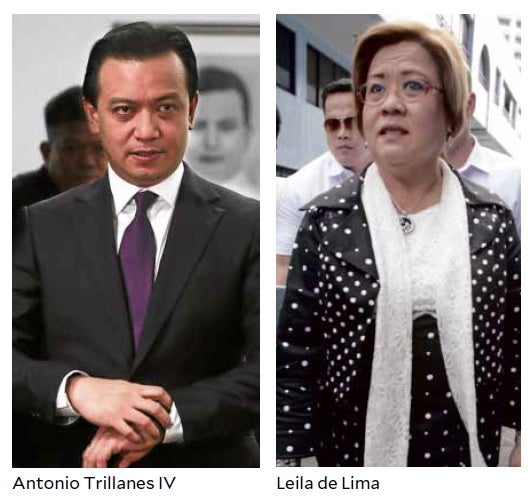 The Inter-Parliamentary Union (IPU) will send an official mission to the Philippines to investigate the political persecution of opposition Senators Leila de Lima and Antonio Trillanes IV.

In separate resolutions adopted at the 139th IPU Assembly in Geneva, Switzerland, the group expressed deep concern over the human rights violations against De Lima and Trillanes.

“The (IPU) considers that the matters at issue in this case warrant an urgent follow-up visit by the Committee on the Human Rights of Parliamentarians,” said the measure on De Lima’s case.

The IPU said it “remains disturbed at the public campaign of vilification by the highest state authorities,” as it renewed its call for the senator’s release.

De Lima is detained on drug trafficking charges based on testimonies of drug convicts.

The group also appealed to the Senate, under the leadership of Senate President Vicente Sotto III, to take a firm stand and “finally be able to act in solidarity with De Lima.”

“The Senate has a special responsibility to help ensure that its colleagues participate in its deliberations and speak out when they face reprisals for their work,” said the three-page resolution.

The IPU also expressed deep concern for Trillanes, following President Rodrigo Duterte’s revocation of the amnesty granted to the senator for rebellion and coup d’etat charges in 2003 and 2007.

It said: “The IPU is concerned that Senator Trillanes may soon be arrested. The sudden questioning of his amnesty gives serious weight to the allegation that this is a targeted attempt to silence him.”

The group said it wanted to get detailed information from the authorities on the factual and legal grounds of the President’s Proclamation No. 572, which voided the amnesty granted to Trillanes in 2011.

A trial observer will closely monitor legal proceedings with regard to their compliance with international fair trial guarantees, the resolution said.

De Lima and Trillanes, both lawmakers from the Bicol region, are among Mr. Duterte’s fiercest critics who have called him out on the bloody war on illegal drugs and his bank accounts.

In the two resolutions, the IPU noted that “the Filipino parliamentary authorities have not responded to IPU requests for information and to its concerns.”

It also expressed dismay at how “the Filipino delegation to this 139th IPU Assembly chose not to respond to the request for a meeting by the IPU Committee on the Human Rights of Parliamentarians.” —Julie M. Aurelio