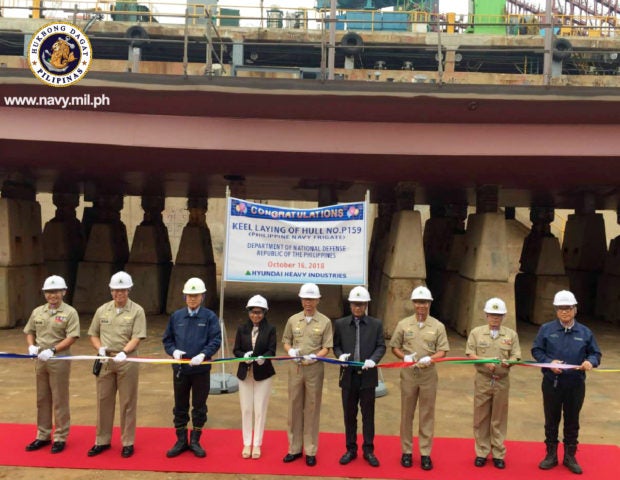 Philippine officials are joined by executives of Hyundai Heavy Industries during the keel laying for the first guided-missile frigate of the Navy. PHILIPPINE NAVY PHOTO

The second major step of construction has officially begun for the Navy’s first of two guided-missile frigates.

The keel of HHI Project Nr 159 was laid on Tuesday in Ulsan, South Korea at the headquarters of Hyundai Heavy Industries, the Navy spokesperson Cdr. Jonathan Zata said in a statement.

“The keel laying ceremony is a significant activity and a major step towards the completion of the country’s first ever frigate project which is scheduled to be delivered to the Philippine Navy by 2020,” Zata said.

The purchase for the controversial frigates was put in the spotlight after sacked Navy chief Vice Admiral Ronald Mercado (now retired) was accused of delaying the project late last year.

Mercado reportedly insisted on the use of a specific brand of combat management systems, the Tacticos Thales, after it passed the Navy’s technical specifications for the frigates.

Lorenzana dismissed Mercado for his supposed “insubordination.” The chosen supplier for CMS for the frigate was Hanwha Systems, which was not the original preference of the Navy.

The contract for the two frigates, one of the military’s biggest modernization projects at P18 billion, was awarded to Hyundai Heavy Industries in October 2016. /cbb