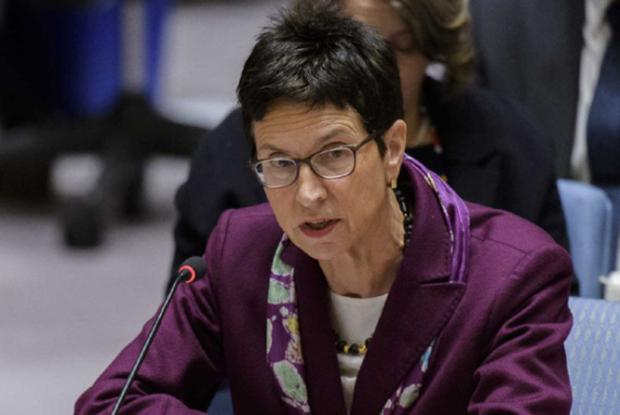 Ursula Mueller, assistant secretary-general for humanitarian affairs and deputy emergency relief coordinator in the Office for the Coordination of Humanitarian Affairs. (UN photo by Manuel Elias)

MARAWI CITY — A senior United Nations official said she saw the need for more humanitarian aid for the displaced people in Marawi, who were still living in tents a year after government forces took over the city.

“To see is to understand the challenge,” said Ursula Mueller, the United Nations assistant secretary-general for humanitarian affairs and deputy emergency relief coordinator in the Office for the Coordination of Humanitarian Affairs.

Mueller made the call during her visit to the Islamic City of Marawi last Tuesday, Oct. 9.

“I was struck by my conversations with displaced women living in the Sarimanok temporary shelters,” Mueller said. “As their displacement continues, they want their children to have access to education. Sustained humanitarian assistance is needed.”

She called on the international community to support efforts by the Philippine government to help people displaced by the 2017 siege on Marawi, which left more than a thousand people dead

She also cited the need for continued support to reduce vulnerability and to build momentum towards long-term recovery.

“There is a lot of hope and opportunity in Marawi, and we need to keep those hopes alive,” Mueller said.

She said that despite President Rodrigo Duterte’s sour relationship with some UN officials for criticizing his war on drugs, the UN reiterated its support for the government’s recovery plan and government’s efforts to seek solutions for those who remained displaced.

While in Marawi, the UN official met local officials and UN humanitarian partners.

The UN has extended various aid packages for Marawi — among them, its central emergency response fund, which provided $7.5 million for life-saving interventions for people displaced by the conflict.

“Partnership needs sustained investment,” Mueller said. “There is a lot of innovation in the Philippines. I’m very impressed by the strong coordination among humanitarian organizations, donors, the public and private sector and the focus on keeping vulnerable people at the centre of response efforts in the Philippines.”

Haroun Alonto Lucman, a resident of Marawi, said he recently passed the main battle area in the city, which used to be so crowded before the siege and now looked like wilderness.

“It’s been more than a year since the liberation of Marawi City and we are still displaced,” he said. “Never mind the rehab plan, this unreasonable delay is degenerating into a denial of property rights. Bring our people in and let them rebuild their homes and lives. It’s time to break silence.”

The military said it could not allow civilians to return to their homes in the most affected areas of the city as they were still looking for more than 50 unexploded ordnance dropped by military planes at the height of the siege last year.

Over 1,000 people died when Maute terror group, reportedly a local cell of IS-inspired militants in Mindanao, took control over sections of the city in May 2017, triggering a five-month war between the militants and government troops. /atm