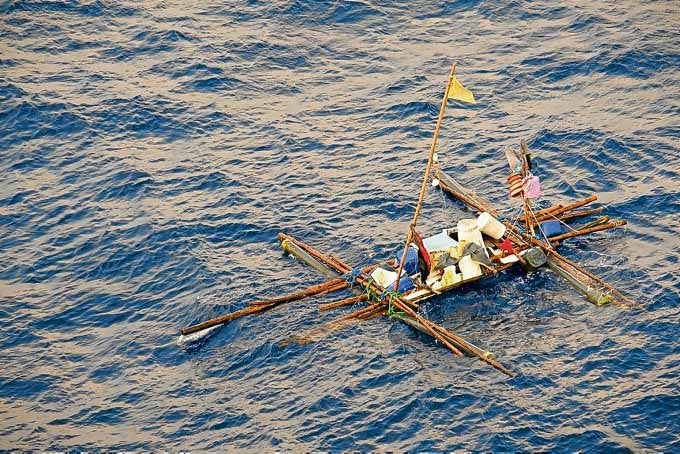 LUCKY TO SURVIVE Five Filipino fishermen are rescued by the USNS Wally Schirra as their makeshift raft drifts in the South China Sea for more than a week in this photo taken on Wednesday. —AFP

It reads like a modern-day take on Ernest Hemingway’s “The Old Man and the Sea”: Five Filipino fishermen are cast adrift for days on a makeshift raft after a huge marlin sinks their boat.

Their 12-meter boat quickly dipped beneath the waves in the early evening of Oct. 3, leaving the crew with little drinking water or food until their eventual rescue by the US Navy on Monday.

“It (the fish) hit the bottom of our boat, leaving two big holes. We suspect it was chasing a smaller fish. It swam around the sinking boat for a while, apparently disorientated,” Batiller said.

The fishermen salvaged what they could, removing the outriggers, planks and barrels to build a makeshift raft.

“Our water ran out after two days. We waved at passing commercial vessels, but no one came to rescue us. But we did not lose hope,” the 42-year-old father of one said, adding the crew also ate raw rice and drank some seawater.

“When we were rescued, that was when our tears fell,” added Batiller, who has since been reunited with his family in Subic, a port about 80 kilometers northwest of Manila.

US Navy to the rescue

The US Navy said the fishermen were lucky to survive, especially because they had drunk seawater.

“On average, death results two to three days after a diet of drinking undiluted seawater or urine in survival-at-sea events as it takes more water than is consumed for the body to process the waste and salt out of the kidneys,” said Leon Hadley, the civilian chief mate from the ship which conducted the rescue, the USNS Wally Schirra.

“Luckily, we were going at a slow enough speed to have spotted the fishermen,” added the Wally Schirra’s master Keith Sauls.

“The individuals were waving their arms and a flag in the air. They were also flashing a white light that was previously thought to be fishing buoy,” Sauls said in an account carried by the Defense Visual Information Distribution Service.

The blue marlin is one of the open ocean’s fastest, strongest predators and is also one of the largest species of bony fishes.

The blue marlin can grow up to 5 meters in length and weigh as much as 820 kilograms.

It is known for its long bill that grows from the front of its head which it uses to stun prey.

“This is the first such incident we have encountered here. Most of the time it’s bad weather sinking fishermen’s boats in the open seas,” Subic coast guard operations officer Erman Besana told AFP.

Despite the near-death experience, Batiller said he and his crew planned to go back to sea after a few days’ rest, provided they find a new boat.

Read Next
Duterte flies to Bali for Asean show of unity
EDITORS' PICK
Quarantine violations still punishable despite deleted provisions in ‘Bayanihan 2’ – Bato dela Rosa
‘Puno na lahat:’ Metro workers brave lack of public transport, rains on Day 1 of GCQ
Leveling up your ‘lutong bahay’ with the kitchen companion you never knew you needed
Someone from the Philippines can become $356 Million richer this Tuesday
BFP raises general alarm over Mandaluyong fire
Cherry Mobile teams up with Cloud Panda PH, launches online store
MOST READ
‘If I had not been SolGen, I will make you eat your words,’ Calida tells Coco Martin
Quarantine passes no longer required under GCQ, but curfew remains
5 car dealership outlets shutting down
BFP raises general alarm over Mandaluyong fire
Don't miss out on the latest news and information.