PH gives aid worth $300K to Indonesia for quake-tsunami victims 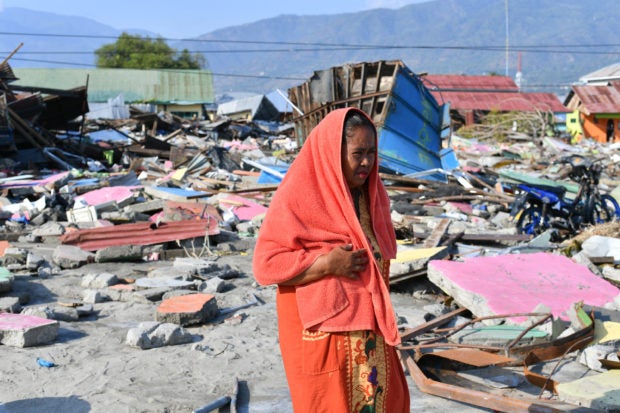 Quake survivor Nurhayati walks at an area where her house once stood in Lere subdistrict in Palu, Indonesia’s Central Sulawesi on October 3, 2018, after an earthquake and tsunami hit the area on September 28. Nearly 1,400 people are now known to have died in the quake-tsunami that smashed into Indonesia’s Sulawesi island as UN officials warned the “needs remain vast” for both desperate survivors and rescue teams still searching for victims. AFP

BALI — The Philippines has sent over US$300,000 in assistance to Indonesia ahead of President Rodrigo Duterte’s arrival here for the Southeast Asian leaders’ meeting.

At a press briefing on Wednesday, Manila’s ambassador to Indonesia Leehiong Wee said that the Philippine government’s donation would be made up of generator sets as well as water and medical supplies.

Wee pointed out, “What happened in Palu was a very big disaster (for Indonesia).”

He was referring to the September 28 magnitude 7.5 earthquake that hit Palu a city in the province of Central Sulawesi and the tsunami that swept the Indonesian provincial capital.

Over 1,700 persons were killed and 5,000 others remain missing in the aftermath of the disaster.

But he pointed out that the 70 years of bilateral relations between Philippines and Indonesia have always been characterized by mutual aid in times of disaster.

Both the Philippines and Indonesia are in the Pacific ring of fire, an area which is characterized by frequent earthquakes and volcanic eruptions.

Wee noted that both countries have been “very helpful in terms of disasters.”

The Philippine government’s assistance in terms of cash and kind were flown in on Wednesday morning to Indonesia through the military’s C-130 aircraft.

It is possible, Wee said, that President Duterte would personally hand over assistance to Indonesia during his informal bilateral talks with President Jokowi Widodo at the sidelines of the Association of Southeast Asian Nations leaders’ meeting to be held here on Thursday.

The two leaders are anticipated to discuss the countries’ efforts in counterterrorism and trade. /je