US, PH agree to increase joint military exercises to 281 from 261 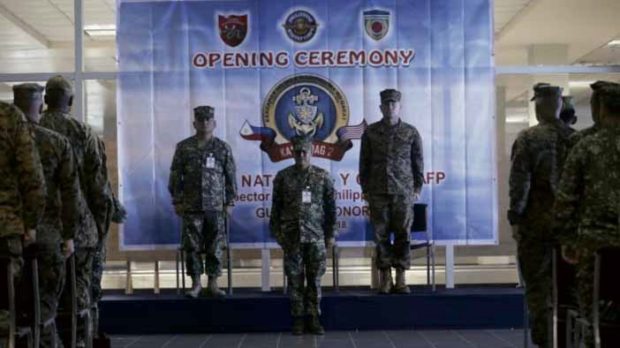 ‘KAMANDAG’ Brig.Gen. Chris McPhilips, chief of the US 3rd Marine Expeditionary Brigade; Maj. Gen. Nathaniel Casem, inspector general of the Philippine Navy; and Brig.Gen. Melquiades Ordiales, deputy chief of the Philippine Marines, preside over the opening of this year’s “Kamandag” (Venom) joint exercises between American and Filipino Marines at Subic International Airport on Monday. US EMBASSY

American and Filipino defense officials have agreed to accelerate military engagements between the two longtime allies, in an effort by the Trump White House to reaffirm the US commitment to the Philippines, The Washington Times reported on Monday.

Adm. Philip Davidson, the US Indo-Pacific commander, and Gen. Carlito Galvez Jr., chief of staff of the Armed Forces of the Philippines, announced the plan to increase the number of American and Philippine “joint security activities” from the current annual level of 261 to 281, the Times said, quoting a report from The Associated Press.

The Times said the agreement was reached as part of the annual assembly of senior US and Philippine military leaders in Manila.

Joint exercises between US and Filipino Marines also started on Monday at Subic International Airport in Zambales province.

Called “Kaagapay ng Mandirigma ng Dagat” (Cooperation of Warriors of the Sea) or “Kamandag” (Venom), the activity involved 1,000 US Marines and 350 Philippine Marines.

About 100 Japanese Marines came as observers of the joint exercises that would be held until Oct. 10 in different parts of the main Philippine island of Luzon.

Capt. Jerber Anthony Belonio, spokesperson for the Philippine Marine Corps, said the exercises would focus on counterterrorism operations, as well as humanitarian assistance and disaster relief.

The Times quoted Col. Noel Detoyato, spokesperson for the Philippine military, as saying the 20 additional joint engagements would drill down into increasing cooperative efforts between the two nations in the areas of counterterrorism, humanitarian aid and maritime security.

Detoyato, however, declined to provide details as to how many of the additional, individual drills would focus on each of the three priority areas outlined during the senior-level meeting in Manila, the Times said.

Philippine security officials are seeking amendments to an 11-year-old antiterrorism law to enable the country to deal more effectively with threats following reports that local terrorists affiliated with the Islamic State (IS) jihadi group are rebuilding their forces after their defeat in Marawi City, Lanao del Sur province, last year.

Commenting on the Times’ report on Sunday that IS fighters were returning to Mindanao to try to establish a caliphate or province for the jihadi group in Southeast Asia, presidential spokesperson Harry Roque said on Tuesday that President Rodrigo Duterte supported the strengthening of security laws, including the amendment of the Human Security Act to allow the state to hold terror suspects longer without filing charges against them.

“Let them attempt to do their evil work but we will always be ready to enforce the laws of the Philippines,” Roque said.

The announcements came days after a new US Department of State assessment placed the Philippines, for the first time, among the five countries with the most terrorist attacks, the paper said.

The Philippines, along with Afghanistan, India, Iraq and Pakistan, were the sites of nearly 60 percent of terrorist attacks last year, it said, quoting from the state department assessment released last week.

Citing figures from the Washington-based Center for Strategic and International Studies, the Times reported on Sunday that there were more fighters affiliated with IS in Southeast Asia, especially armed groups based in the Autonomous Region in Muslim Mindanao in the southern Philippines, than there ever were battling US forces in Afghanistan and Iraq during the height of the US-led wars there.

“Foreign terrorist fighters are heading home from the war zone in Iraq and Syria or traveling to third countries to join [IS] branches there,” the Times quoted Ambassador Nathan Sales, the US Department of State’s top counterterrorism coordinator, as saying.

The Times said the threat exploded into view in May last year when members of the Maute gang of extortionists and a faction of the Abu Sayyaf bandit group that had pledged allegiance to IS overran Marawi and held it for five months.

It said the black banners of IS flew over Marawi—the first city in Southeast Asia to be seized by an IS affiliate—until October, when the Philippine military, backed by US intelligence and air power, took back control. —Reports from The Washington Times, Jeannette I. Andrade and Julie M. Aurelio