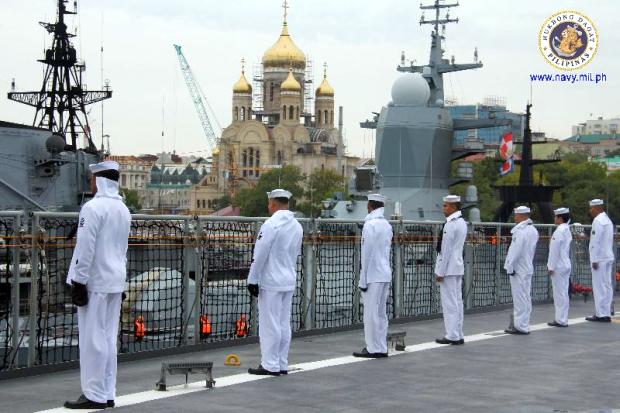 The BRP Tarlac makes port call in Vladivostok in Russia on Monday, Oct. 1, 2018. (Photo from the Facebook page of the Philippine Navy)

A Philippine Navy unit made history on Monday by completing the country’s first-ever port call in Russia.

The 440-man contingent from Naval Task Force 87, aboard the strategic sealift vessel BRP Tarlac,  arrived on Monday afternoon at the Russian Pacific Fleet’s headquarters in Vladivostok.

According to Capt. Florante Gagua, Naval TF 87 chief, the contingent was warmly welcomed by the commander-in-chief of the Russian Navy, Adm. Vladimir Koroley, and were gifted with flowers as well as bread and salt by Russian ladies clad in their national costume.

The gesture of giving bread and salt is a Russian ceremonial welcome particularly for important, respected or admired guests.

The offering is a round bread with a shalt shaker on top. It’s placed on a round tray with an embroidered towel. According to Russian custom, bread symbolizes wealth while salt keeps away evil forces.

Gagua expressed gratitude to President Rodrigo Duterte and Vice Adm. Robert Empedrad, Navy flag officer-in-command, for trusting him to lead the contingent in its historic engagement in Russia.

In a statement he issued late Monday, Gagua said: “This and similar activities are great platforms for the Philippine Navy to work closer together with other  countries’ navy to address common maritime security concerns, as well as avenues to learn from and enhance relations with navies such as the Russian Navy.”

“The Philippine Navy endeavors to further enhance and sustain the promotion of peace, stability, and maritime cooperation through navy-to-navy engagements,” he added.

He pointed out that the historic port call was made possible through the President’s efforts in modernizing the Navy.

After the Russian visit concludes on Saturday, Oct. 6, BRP Tarlac will set sail for Jeju Island in South Korea for the international fleet review, which will be held from Oct. 10 to 14 to mark the 70th anniversary of the Republic of Korea Armed Forces. /atm 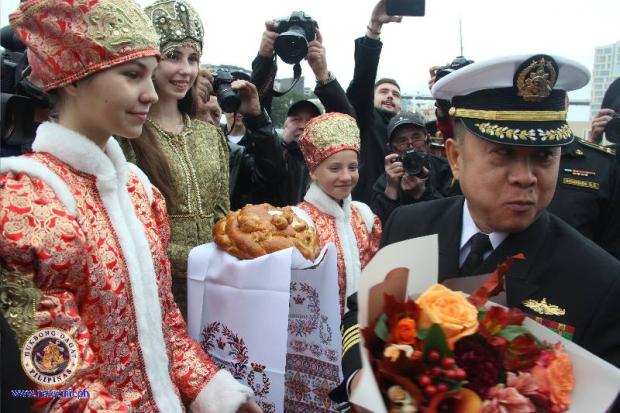 Navy Capt. Florante Guagua, chief of the 440-man contingent from Naval Task Force 87, gets a warm welcome from Russian women in traditional costume. (Photo from the Facebook page of the Philippine Navy)