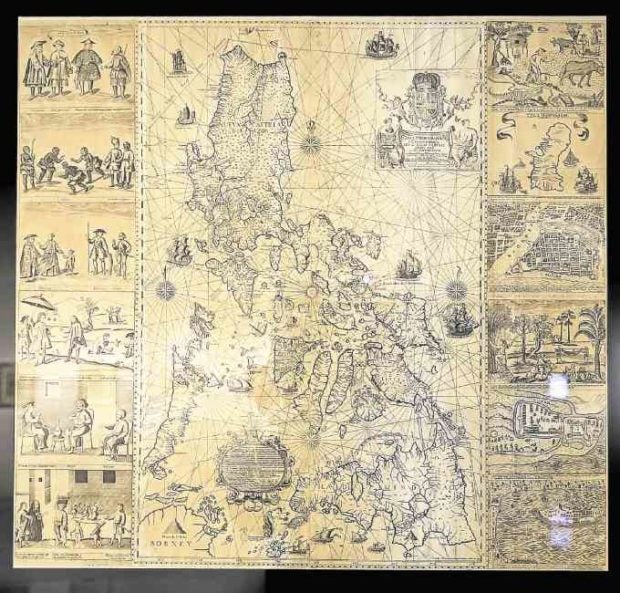 A replica of an ancient map that debunked China’s historical claims in the South China Sea is one of the features of a new mobile museum that hopes to showcase the Philippines’ maritime heritage.

The Murillo Velarde 1734 Map, dubbed as the “mother of all Philippine maps,” was one of the documents presented by the Philippines to disprove China’s nine-dash-line claims in the South China Sea, when it filed a case against the Asian giant in the international court.

The Permanent Court of Arbitration had declared China’s massive and historical claims as invalid in 2016, but the latter has refused to accept the ruling.

The map features various images depicting the lives of people during that period. But its highlight was the inclusion of “Panacot,” known today as Scarborough Shoal or Panatag Shoal. This debunked China’s claims that they have historical rights over the shoal which they have continued to control since the standoff with the Philippine Navy in 2012.

The 284-year-old map was acquired by Filipino executive Mel Velarde in an auction in London in 2014 for about P12 million. Replicas are being distributed to government agencies.

The Philippines is home to a sprawling archipelago of thousands of tropical islands and has one of the world’s longest coastlines, but most Filipinos do not seem to be aware of this.

To raise national consciousness of the Philippines’ archipelagic heritage, the Philippine Navy and the Citizen Support Your Navy Foundation Inc. on Tuesday launched the first ever mobile marine and naval centrum at the SM Megamall activity center.

The mobile exhibit, which will be put up across the country, is part of this year’s celebration of the maritime archipelagic nation awareness month.

At least 30 of the 55 science-based interactive exhibits on maritime resources, history, and security are on display from Tuesday until Thursday.

“We rushed this, and we have 30 of 55 target exhibits for the mobile marine naval center but we took the courage to launch it now…because this is the maritime archipelagic nation awareness month,” said Dr. Cora Claudio, one of the Navy’s board of advisers.

The exhibit also features artworks for sale, lectures on marine topics, and a recruitment booth for the Philippine Navy.

It also aims to educate the public on the protection of marine biodiversity and resources and other naval concerns.

Navy chief Vice Admiral Robert Empedrad said they hope to promote awareness of the country’s identity as a maritime nation among the youth and local communities in “creative and engaging ways.”