Number of Asian children dying before their 5th birthday 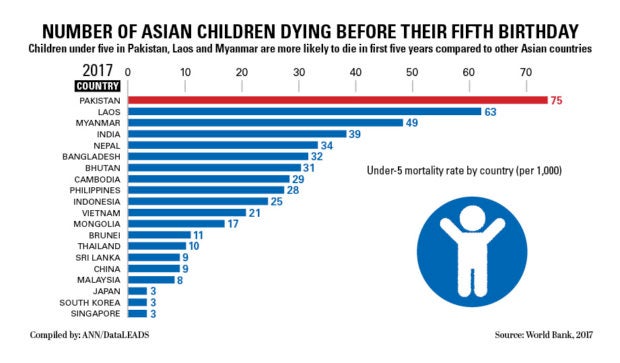 NEW DELHI — Although there has been a remarkable decrease in the death rate of children under five in Asia, there are many countries in the region that are still struggling to contain the mortality rate and provide a better survival for the children to stay alive beyond five.

According to the World Bank report the survival depends on the country these children are born in and it also mentions that “reducing neonatal mortality between 2000 and 2017 has been 1.5 times slower than for older children (under 5 deaths after the first month of life) for the same period.

South Asian children face the most risk of dying before they turn five. Pakistan has the most number of deaths per thousand at 75 in Asia.  Apart from premature deaths other causes of death are pneumonia, diarrhea and malaria.

Policy makers call for a major shift in allocation of funds to health sector to address this grave issue.

India has fourth highest mortality rate in the region at 39 per thousand. The rate has gone considerably down as compared to the numbers from previous years.  This is a major milestone for the country that the under-five mortality rate is same as the global average.

India is followed by Nepal, Bangladesh and Bhutan.

Cambodia has eighth highest under five morality rate and is doing better in saving it children than its neighboring countries like Laos. It has improved significantly in reducing the death rate.  It is followed by Philippines, Indonesia and Vietnam.

Mongolia, Brunei and Thailand have under five mortality rate of 17, 11 and 10 per thousand respectively.

Sri Lanka has the lowest under five mortality rate in South Asia. The country has 9 deaths per thousand and has been consistently better than other neighbouring South Asian countries. It is followed by China and Malaysia.

Japan, South Korea and Singapore have the lowest under five mortality in the region with each having three deaths per thousand.

The three countries are also considered as the safest places to give birth.