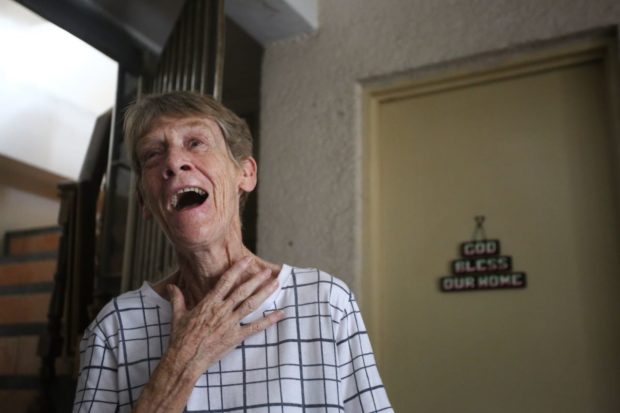 Sister Patricia Fox reacts while inside her house in QC upon learning of the news that DOJ has reversed BI’s ruling that downgraded her missionary visa to a tourist visa in this file photo taken on June 18, 2018. On Thursday, Sept. 13, 2018, the Bureau of Immigration denied Fox’s request for an extension of her missionary visa. INQUIRER FILE PHOTO / JAM STA. ROSA

The Bureau of Immigration (BI) has denied the request of Australian missionary Sister Patricia Fox for an extension of her missionary visa.

In a two-page order signed on Thursday, Fox’s request for extension was denied by the BI citing the deportation order previously issued against her.

“The BI already saw that Sister Fox violated the conditions of her stay and is considered undesirable, hence a deportation order was previously issued against her,” said BI spokesperson Dana Krizia Sandoval.

“Our legal team saw that approving the extension of her missionary visa will be inconsistent with the findings cited in her deportation order,” she added.

The BI said that Fox already spent 27 years in the country as a missionary and according to the memorandum of agreement between the BI and the Catholic Bishop’s Conference of the Philippines, foreign missionaries should stay in the country for only 10 years.

Fox would be required then to apply for the downgrading of her visa within 15 days from receipt of the denial order.

Downgrading will revert her status to a temporary visitor’s visa, with a 59-day validity, starting from the date of the expiry of her missionary visa, said Sandoval.

Fox has a pending appeal before the Department of Justice (DOJ) on her deportation. Sandoval said that the BI “still needs to wait for the decision before acting on the deportation.”

The BI said they may grant Fox the Temporary Visitor’s Visa upon downgrading, without prejudice to the resolution of her appeal to the DOJ on her deportation. /cbb

ADVERTISEMENT
Read Next
LOOK: Relatives, lawyers and supporters visit condemned Mary Jane Veloso in Indonesia
EDITORS' PICK
Quarantine violations still punishable despite deleted provisions in ‘Bayanihan 2’ – Bato dela Rosa
‘Puno na lahat:’ Metro workers brave lack of public transport, rains on Day 1 of GCQ
Leveling up your ‘lutong bahay’ with the kitchen companion you never knew you needed
Someone from the Philippines can become $356 Million richer this Tuesday
BFP raises general alarm over Mandaluyong fire
Cherry Mobile teams up with Cloud Panda PH, launches online store
MOST READ
‘If I had not been SolGen, I will make you eat your words,’ Calida tells Coco Martin
Quarantine passes no longer required under GCQ, but curfew remains
5 car dealership outlets shutting down
BFP raises general alarm over Mandaluyong fire
Don't miss out on the latest news and information.