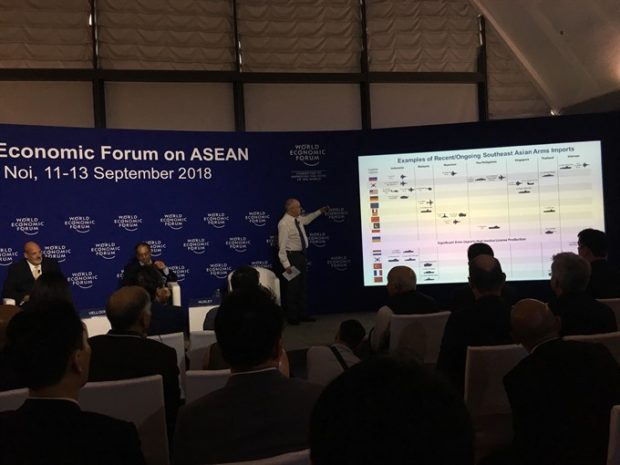 HÀ NỘI – Although Southeast Asia countries are spending more on military defense equipment, it doesn’t mean they are increasing the risk of conflict in the region, according to Tim Huxley, Executive Director at the International Institute for Strategic Studies.

Speaking at a session on understanding Asia’s new balance of power, one of the activities as part of the 2018 World Economic Forum on Asean in Hà Nội, Huxley revealed some surprising numbers on regional arms spending.

In 2017, Southeast Asian countries spend more than US$39 billion on defense. According to Felix Heiduk from the German Institute for International and Security Affairs, total defense spending of Asean states doubled over the last 15 years in absolute terms, with countries like Indonesia and Thailand witnessing military expenditure growth rates of 10 percent year-on-year.

But Huxley said there’s no need to panic yet.

“They are mainly doing this commensurately with their economic growth, which has been famously rapid for most of the current century,” he said.

He also pointed out that while the widespread impression was that regional states’ escalating military spending was about China, it was actually misleading.

No other regional state comes close to competing with China, which in 2017 alone spent $151 billion on arms, he pointed out.

For example, despite its tiny size, Singapore is by far the biggest defense spender in Southeast Asia, outspending even Indonesia, which has 45 times more people. Yet Singapore has no territorial claims in the South China Sea, he said.

When asked about how Asean has prepared for a potential conflict between major powers in the South China Sea (called East Sea by Việt Nam), Tim said he saw very little.

“I don’t see any Asean preparation for this or willingness to do this. There would be consultation among members but as a whole they have been unable to present a strong common front on the issue of the South China Sea and this has helped China get away with it,” Tim said.

He cited the fact that in reality China had continued to militarize islands, deploying military aircrafts and missiles to the area.

“And there’s no sign that is going to stop,” he said.

On the matter, Robert Girrier, President of the US’s Pacific Forum, reminded that the ruling of the Arbitral Tribunal on the case of China and the Philippines was a clear statement, and that there needs to be a multilateral mechanism to challenge China’s stake on the South China Sea.