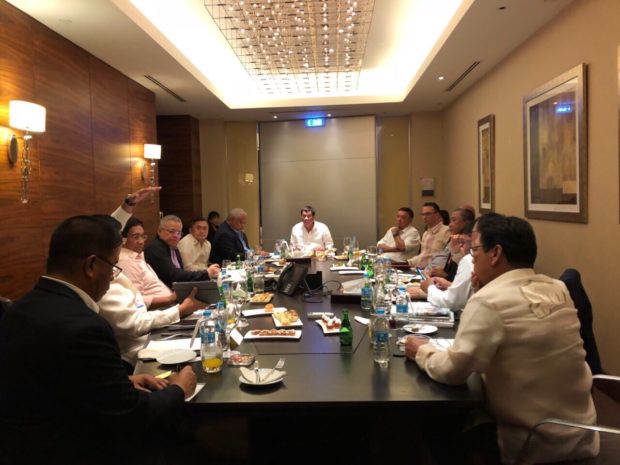 President Rodrigo Duterte holds a Cabinet meeting in Amman, Jordan on September 7 to discuss the economic and security developments in the Philippines. PHOTO: Special Assistant to the President Christopher “Bong” Go

AMMAN – President Rodrigo Duterte held a Cabinet meeting here before dawn Friday (Philippine time) to discuss the economy, security and the recent developments back home in the Philippines.

“[It’s about the] trip [and] the Philippines,” Go said in Viber message.

Asked about the specific agenda during the meeting, Go said “various” matters were discussed.

“It’s about the trip, economy and security,” he said.

While Duterte was on a foreign trip, the Philippines was beset by a nine-year high 6.4 percent inflation, a political tension triggered by a pending arrest of opposition Sen. Antonio Trillanes IV’s over the revocation of his presidential amnesty and a blast that rocked Sultan Kudarat province in Mindanao.

He will fly back to the Philippines on Friday night, a day earlier than his scheduled trip back home.

READ: Duterte to fly back home from Jordan a day earlier