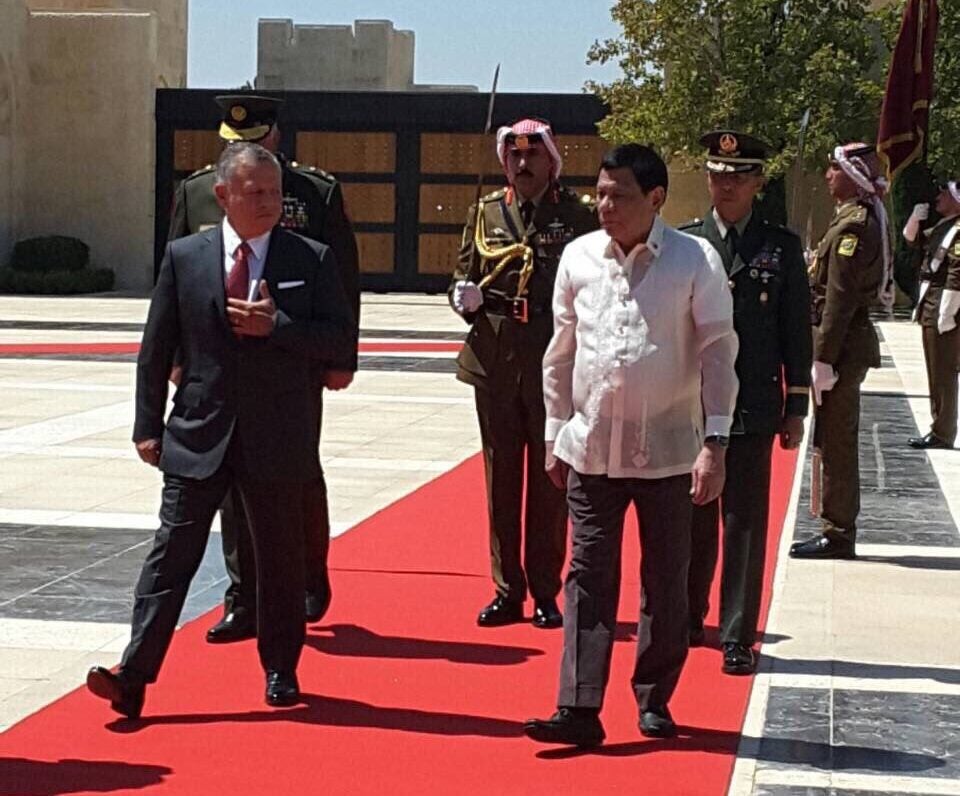 AMMAN—The Philippines and Jordan on Thursday signed five cooperation agreements as President Duterte and King Abdullah II sat down to discuss strengthening relations between their nations.

The two leaders then sat down for talks before going into a working lunch.

President Duterte arrived in Jordan on Wednesday for a three-day official visit.

He will return home on Saturday, a day earlier than scheduled.

Presidential spokesperson Harry Roque said there was no special reason for cutting the President’s trip short.

The agreements on defense, investment, political consultation, maritime cooperation and labor were signed ahead of President Duterte’s meeting with Abdullah.

Special Assistant to the President Christopher Go said the donation was discussed during the meeting between President Duterte and Abdullah.

Go said Jordan would turn over the helicopters, as well as brand new mortars, rifles and grenade launchers, to the Philippines next July, after training Filipino pilots for nine months.

President Duterte spoke about the helicopters in May, saying National Security Adviser Hermogenes Esperon advised him not to criticize then UN High Commissioner for Human Rights Zeid Ra’ad al-Hussein, who is a cousin of King Abdullah, while talks were going on for the donation.

Zeid had angered President Duterte by saying the President needed psychiatric evaluation after warning that he would have UN special rapporteurs listed as terrorists.

In an interview with Radio Television Malacañang, Philippine Ambassador to Jordan Akmad Atlah Sakkam said the labor agreement signed with Jordan was “much better” than the one the country signed with Kuwait.

Sakkam said Filipino maids in Jordan had access to the internet and allowed to use cell phones, cook their own food and exercise their religion.

He said the maids were also given weekly free time with pay, and described Jordan as a “very good second home” for Filipino workers.

“[Jordanians] are honorable and they also look upon our workers with respect,” Sakkam said.

He said Filipino businessmen needed to look at halal food as possible export to Jordan.