Guarding against radicalization of foreign maids in Singapore 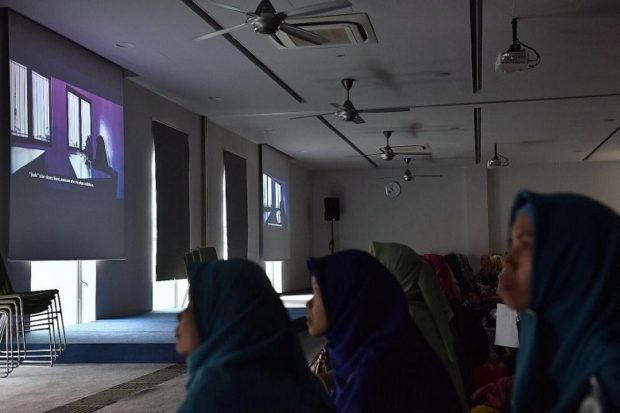 A screening of Pengantin, which explores the issues faced by Indonesian maids in their search for companionship. The Straits Times/Asia News Network/LEE JIA WEN

SINGAPORE — Lonely and seeking companionship, Indonesian maids have become targets for terrorist recruiters, who befriend and even romance them through social media.

This phenomenon of maids being lured into terror networks is something religious groups here are taking steps to prevent.

Yesterday, a group of around 250 Indonesian maids attended a screening of the documentary Pengantin, or Bride, at Alkaff Upper Serangoon Mosque.

The documentary, made by Indonesian deradicalization advocate Noor Huda Ismail, tells the stories of three Indonesian maids looking for love – two of whom were later jailed for their involvement in terrorist-related activities.

The documentary screening and its subsequent dialogue with Mr Noor Huda were jointly organized by the mosque and the Religious Rehabilitation Group (RRG), which aims to correct the misinterpretation of Islamic concepts and dispel the extremist and terrorist ideologies associated with them.

“I believe Indonesian maids are vulnerable (to becoming radicalized), especially when they are all alone,” said Dr Leyaket Ali, an RRG counsellor. “There is ‘bait’ online, targeted at empty hearts.”

There have been past cases of foreign maids radicalized through the Internet here. In January last year, Home Affairs Minister K. Shanmugam said seven radicalized maids had been repatriated since 2015.

Mr Noor Huda said he made the film in the hope that a visual – rather than written – medium would better connect with the audience and drive home the message that maids should be careful when searching for companionship online.

The word Pengantin is a codeword for “suicide bombers” in Indonesian jihadi language.

One of the women featured in the documentary, Dian Yulia Novi, had worked as a maid in Singapore and then Taiwan, where she was radicalized online. She later married a pro-ISIS militant, and was jailed for 7½ years for plotting to blow herself up outside Jakarta’s presidential palace during the changing of the guard in 2016.

“If you look at the trajectory of individuals who get involved in ISIS (the Islamic State in Iraq and Syria), they do not start off reading religious texts,” said Mr Noor Huda, who founded a non-governmental organisation that helps former terrorists rehabilitate back into the community.

“They started by having individual issues or problems, and then they turned to religion. But people tend to portray this as a purely religious issue or that they do not have good Islamic understanding.”

Indonesian maid Novi Mandasari, 29, who attended the documentary screening, said she is wary of falling for extremist ideology in the guise of companionship.

She seeks religious advice from the mosque, as she knows that other influences, such as online messages from ISIS trying to recruit volunteers, are dangerous.

“Singapore is very strict – we have to follow the rules because we are here to work,” added Ms Novi, who has worked as a maid here for six years to support her mother and two siblings back home.