Misunderstanding feared after Del Pilar ran aground on shoal 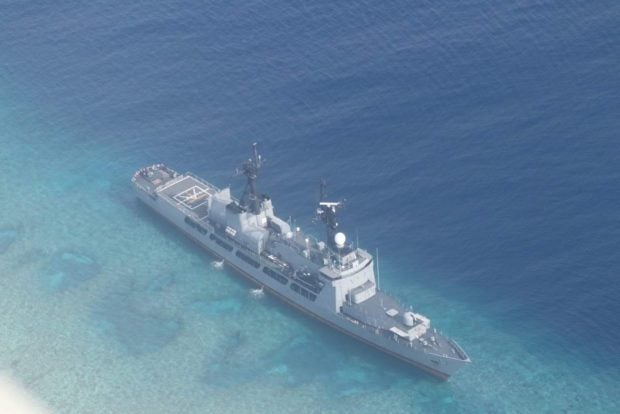 Philippine defense officials notified their Chinese counterparts after the accidental grounding of the BRP Gregorio del Pilar on Hasa-Hasa Shoal, which Beijing claims, to avoid any misunderstanding, according to two Filipino officials.

The Gregorio del Pilar (FF-15) was pulled from the shoal before midnight Monday, the security officials told The Associated Press on Tuesday. They spoke on condition of anonymity for not having the authority to speak on the matter.

The ship ran aground on August 29 while on routine patrol near the barren shoal, known internationally as Half Moon Shoal.

The incident brought to mind the grounding of the BRP Sierra Madre on the disputed Ayungin Shoal (Second Thomas Shoal), where it was intentionally beached in 1999 and has since served as a military outpost.

China has repeatedly demanded the removal of the now rusty Sierra Madre, which is manned by a contingent of Philippine Marines.

During periods of increased tension in the West Philippine Sea in 2014 and 2015, Chinese Navy and Coast Guard vessels tried to prevent the Philippines from resupplying the Marines on the Sierra Madre.

Two days after the grounding of the Del Pilar, Chinese Foreign Ministry spokesperson Hua Chunying announced that their coast guard vessels and a rescue vessel were already near the site on the eastern edge of the disputed Spratly archipelago.

Before midnight Monday, Sept. 3, 2018, tugboats were used to pull the Del Pilar from the shallow fringes of Hasa Hasa. The Navy flagship is currently being towed back to a Philippine port after damaging some of its propellers. It’s more than 100 crewmen were unhurt.

Defense Secretary Delfin Lorenzana said last week that China offered to help but that the Philippines would handle it.

At least four Philippine Navy and Coast Guard ships were deployed to secure the BRP Gregorio del Pilar and provide food and other supplies to its sailors. Tugboats were hired to extricate the ship, military spokesman Col. Noel Detoyato said.

The frigate is one of three former U.S. Coast Guard cutters, which were acquired by the Philippine military, and are the Philippines’ largest warships.

The United States and Asian governments which have claims in the disputed sea, including the Philippines, have raised alarms over China’s island building and militarization of the strategic territory.

The Philippines has been one of the most vocal critics of China’s assertive moves in the disputed waters. In 2016, it largely won a complaint it lodged before an international tribunal, which invalidated Beijing’s sweeping territorial claims in the South China Sea.

Philippine President Rodrigo Duterte, however, took steps to revive once-frosty ties with China after he took office in 2016 as he sought infrastructure funding and more trade and investment from Beijing. /cbb