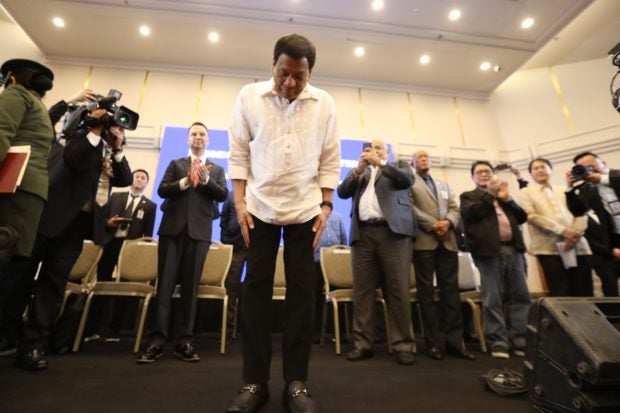 President Rodrigo Roa Duterte shows a gesture of respect as he takes center stage during his meeting with the Filipino community in Israel at the Ramada Hotel in Jerusalem on September 2, 2018. KING RODRIGUEZ/PRESIDENTIAL PHOTO

JERUSALEM—President Rodrigo Duterte has apologized to former US President Barack Obama for calling him a “son of a bitch” in 2016, which sparked a new low in their nations’ long alliance.

Mr. Duterte lobbed the insult at Obama in response to steady criticism from the United States over his violent war on drugs, which had killed thousands of addicts, becoming a target for international condemnation.

But Mr. Duterte said the Philippines’ relationship with America had since improved under US President Donald Trump, whom he described as a “good friend” who “speaks my language.”

“It would be appropriate also to say at this time to Mr. Obama that you are now a civilian and I am sorry for uttering those words,” Mr. Duterte said on Sunday night in a speech at an event with Filipinos in Israel held at the Ramada Hotel.

Mr. Duterte and Obama were scheduled to meet on the sidelines of the Association of Southeast Asian Nations summit in Laos in September 2016, but the US leader canceled the meeting after the Philippine President vowed to curse him if he brought up human rights at their talks.

Mr. Duterte explained that he cursed Obama because the then US president criticized his war on drugs.

He said he would have preferred Obama bring a complaint against him in the United Nations than telling the public that “I am wrong.”

The Philippine leader arrived in Tel Aviv earlier on Sunday for a four-day official visit as his nation sought to develop new sources of military hardware and nail down protections for 28,000 Filipinos working in Israel.

After his election in 2016, Mr. Duterte quickly earned a reputation for using vulgar language against critics, which his aides had tried to minimize or explain away.

Other ‘sons of bitches’

He branded Pope Francis and the then US ambassador to Manila, Philip Seth Goldberg, “sons of bitches.”

He also fired expletives at the United Nations and during a speech raised his middle finger to the European Parliament in defiance of its criticism of alleged human rights abuses in his war on drugs.

Mr. Duterte sparked fresh criticism ahead of his departure for Israel, blaming the high number of rapes in his hometown, Davao City, on the large number of beautiful women there.

Mr. Duterte has on several occasions made rape jokes in public since his presidential campaign in 2016.

The latest comment was denounced by women’s rights defenders.

“Rape happens because of the rapist, not because of the beautiful women. We take this issue seriously. We do not poke fun at it,” Vice President Leni Robredo told reporters in Manila on Monday.

Robredo said Filipinos should not just shrug when someone made fun of rape.

“To imply that it is the women’s fault why they are being raped is not funny. We must protest this, knowing this is not right,” she said.

“This is democracy. Freedom of expression,” the President said at his meeting with the Filipino community.

“I did not say all of them were raped. But you are almost mesmerized or tempted because that’s how you control yourself,” he said.

Pointing out Uson in the audience, Mr. Duterte said she had many enemies, although he acknowledged that she had done things that he considered going overboard.

“But just the same, as President who is sworn to protect the Constitution and enforce it, she is covered with this privilege, freedom of expression,” he said.

At the start of the meeting, Mr. Duterte appeared teary-eyed as he looked at his compatriots in Israel.

“This is the first time I was moved to tears with our people,” he said. “Maybe because I’m here in the Holy Land.”

Mr. Duterte also warned his critics who invoked God and pictured him as the devil, saying he was open to a debate on the matter.