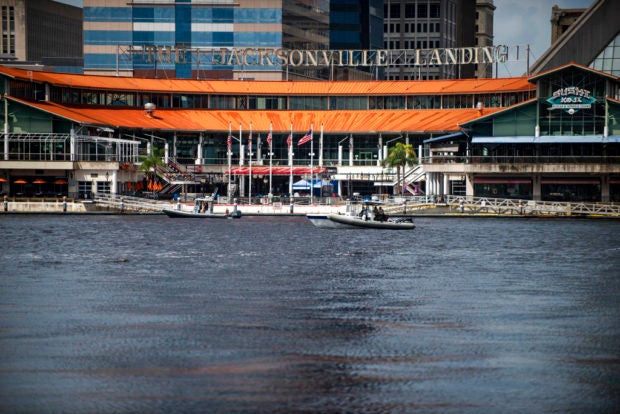 Law enforcement patrols the St. Johns River by boat just outside the Jacksonville Landing where an active shooter was reported Sunday, Aug. 26, 2018 in Jacksonville, Florida.  AP

No Filipino was among the victims of a fatal shooting incident in Jacksonville Landing, Florida, the Department of Foreign Affairs (DFA) said Monday.

Citing a report from the Philippine Embassy in Washington, the DFA said it was monitoring the situation of the Filipino community in Jacksonville Landing after the mass shooting on Sunday that left at least three people dead and 11 wounded.

There are around 13,700 members of the Filipino community in Florida’s 4th Congressional District, which includes Jacksonville, the DFA said.

Authorities said the gunman opened fire inside a gaming bar, killing two and wounding 11 others before he shot and killed himself. The motive of the shooter is still being investigated.

The DFA, through the Philippine Embassy in Washington, D.C., expressed its condolences to the families of the victims of the shooting incident.

Ambassador Jose Manuel Romualdez has reported the incident to Foreign Affairs Secretary Alan Peter Cayetano and informed him that authorities were still in the process of identifying the victims.

According to Romualdez, Honorary Consul Henry Howard of the Philippine Consulate in Miami has reported that he has not received any report of Filipino casualties so far. /cbb