Duterte to US: We need attack helicopters, not F-16s 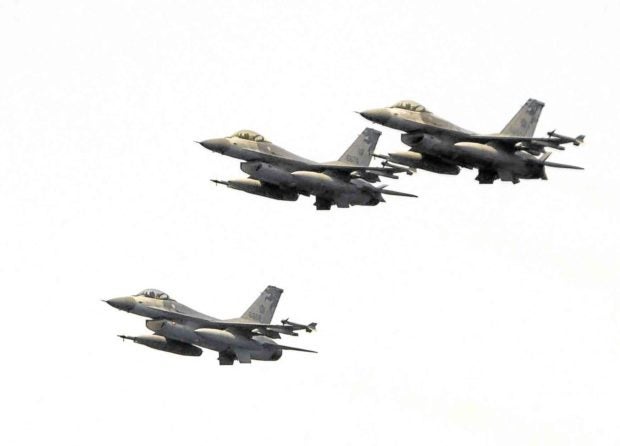 ‘UTTERLY USELESS’ For the kind of enemies the government faces, President Duterte says the F-16 fighter jets being offered by the United States do not meet his requirements. —AFP

Mr. Duterte on Thursday night scoffed at the offer he said was made in a letter to him by US Defense Secretary James Mattis, Secretary of State Mike Pompeo and Commerce Secretary Wilbur Ross, which came a week after a visiting US defense official warned Manila that acquiring major military equipment from Russia could harm Philippine-US relations.

The Duterte administration is beefing up the Armed Forces of the Philippines and has been considering acquiring weapons from other countries, especially Russia from where the President said Manila might buy submarines.

Addressing his military commanders on Thursday night in Davao City on the 12th anniversary of the Eastern Mindanao Command, Mr. Duterte quoted the three US officials as saying that the strong ties between the two longtime allies would grow “by increasing our dialog and cooperation, especially security cooperation and trade.”

The US officials said Washington wanted to partner with Manila “on other significant defense procurement for our mutual benefit, including the Lockheed Martin F-16 multirole fighter platform and your attack helicopter platform, among other systems.”

In response, Mr. Duterte said: “How many F-16s can I buy? Two or three? For what? Against China? Against whom? Against the Asean countries? We do not have any quarrel with them.”

The Philippines is a member of the Asean, or the Association of Southeast Asian Nations, which also includes Brunei, Cambodia, Indonesia, Laos, Malaysia, Myanmar, Singapore, Thailand and Vietnam.

“We do not have any other enemy [except the] New People’s Army, [the Islamic State group] and the Abu Sayyaf,” he said.

“We do not need the F-16 and yet they dangled that to us after they humiliated us,” he said, referring to US criticism of his bloody war on drugs, plus what he said were insults from former US President Barack Obama on the alleged extrajudicial killings in the Philippines.

“It would be utterly useless to buy [the F-16]. But I need attack helicopters and small planes for the counterinsurgency,” he said.

Duterte repeated his frustrations with the United States, including the nondelivery of about 23,000 rifles, which the Philippine National Police sought to buy from an American supplier.

The arms purchase got derailed after some US legislators raised concern over Mr. Duterte’s police-led crackdown against illegal drugs, he said.

Despite Mr. Duterte’s antagonism toward Washington, a Philippine security official said the government was considering to buy combat utility helicopters from the United States, among other countries, following the President’s order to cancel a multimillion-dollar deal to buy 16 helicopters from Canada.

Known for his impromptu decisions and public outbursts, Mr. Duterte ordered the cancellation of the deal to acquire Bell 412EPI helicopters after the Canadian government decided to review the P12-billion contract due to concerns the Philippine military might use the utility helicopters in counterinsurgency assaults instead of just transporting troops and supplies.

In a Facebook post on Wednesday, Carlos Sorreta, the Philippine ambassador to Russia, said Moscow was willing to provide brand new military equipment to the Philippines that were “customized to the specific needs” of the country.

Read Next
Like Malaysia, ‘PH should call off China-backed projects’
EDITORS' PICK
Apple warns of flaw that lets hackers into iPhones, Macs
Heads may roll at BOC, says Palace if sugar smugglers are allowed to use recycled import permits
vivo brings to the Philippines a powerful smartphone with a slimmer body, the vivo Y02s for only PHP 6,499
House energy committee chair Arroyo bats for cheap electricity
What to watch out for when selecting a video surveillance solution
46% of schools nationwide to have full face-to-face classes on Aug. 22
MOST READ
DepEd to give teachers P5K cash allowance within first week of classes
LOOK: Miel Pangilinan dazzles in glittery pre-debut shoot
DOJ indicts bank officer in $2.1 billion Wirecard fiasco
PH importing sugar after all: Marcos okays 150,000 MT
Don't miss out on the latest news and information.