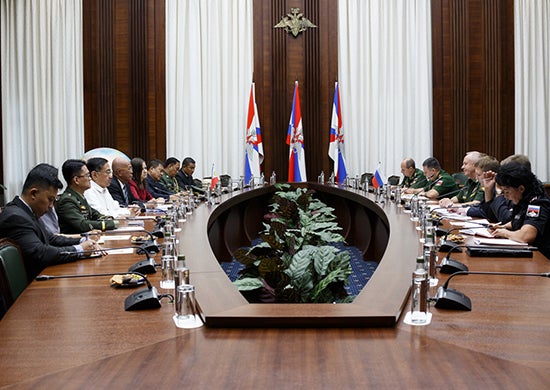 Filipino military officers and enlisted personnel will soon find their way to Russia to train with their counterparts as bilateral ties between the two countries continue to warm.

“Our new defense attache here, Col. Dennis Pastor is looking at the military courses that our officers and soldiers could avail to improve our capabilities,” Defense Secretary Delfin Lorenzana told reporters Thursday.

The earliest exchange of students is in 2019, the defense chief said, but it would still depend on how fast Filipino troops could learn the Russian language.

When President Rodrigo Duterte assumed office in 2016, he alienated the United States, long-time ally and steered the country closer towards China and Russia as part of his independent foreign policy.

Lorenzana is in Russia this week to attend a military exhibit and meetings with defense officials and companies.  The Philippines is also looking at Russia as a potential supplier of some of its military hardware, including submarines.

“The sides gave a positive assessment to bilateral cooperation in the military and military-technical fields and outlined steps for their further expansion,” the Russian defense ministry said in a statement.

Fomin also thanked Lorenzana for “the firm position of the military-political leadership of the Philippines on the development of military-technical cooperation with Russia.”

A Philippine Navy ship is scheduled to make its first port visit in Vladivostok late next month. /muf

Read Next
Duterte lambasts EU anew over criticism of his war on drugs
EDITORS' PICK
Holidays made best with Acer’s ‘Holidays at Home’ raffle promo
Gov’t fine-tunes alert level system
DOH checking if 3 COVID cases due to Omicron
A grand way to celebrate the holidays
Corruption in PH: Where presidential aspirants stand
Smart offers wireless fiber-like speeds to Filipino homes with country’s first 5G Prepaid Home WiFi
MOST READ
Bong Go left PDP-Laban with presidential bid under PDDS — Pimentel
FDA warns against use of 5 imported beauty creams
Orthodox priest shouts ‘Pope, you are a heretic’ at Francis in Athens
Isko’s messaging takes a turn as he commends Duterte
Don't miss out on the latest news and information.