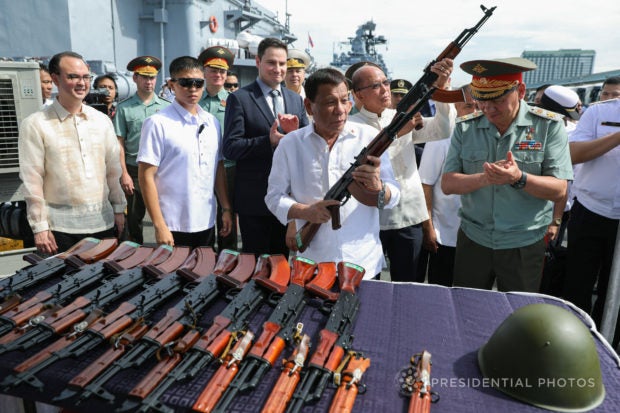 RUSSIA GIVEAWAY President Duterte inspects the AK-74M rifles donated by Russia during a
ceremonial turnover at a Manila port in 2017. —MALACAÑANG PHOTO

The acquisition of military equipment from Russia by the Philippines may hurt its long-standing alliance with the United States, according to a top US defense official who is visiting Manila.

“I think they should think very carefully about that,” Schriver told journalists during a roundtable discussion at the US Embassy after his meeting with Defense Secretary Delfin Lorenzana.

“If they proceed with purchasing major Russian equipment, I don’t think that’s a helpful thing to the alliance,” Schriver said.

“I think we can be a better partner than the Russians can be to the Filipino people,” he added.

Lorenzana last week said President Duterte wanted to acquire submarines from Russia, although the Armed Forces of the Philippines already was looking at South Korea, France and Germany as possible sources.

Lorenzana is set to meet his Russian counterpart next week.

The acquisition of submarines was pushed forward to the “second horizon” of the Revised Armed Forces of the Philippines Modernization Program, set for 2018 to 2022.

“When you buy weapons systems, particularly major platforms, you’re not just buying capability, you’re investing in a relationship,” according to Schriver.

He said looking toward the United States for war materiel “helps us continue in our interoperability, helps us improve our ability to operate in all kinds of scenarios.”

Schriver cited “the nature” of the current Russian regime and how buying equipment from Russia would reflect on the country.

“I don’t need to go to the full laundry list: Crimea, Ukraine, the chemical attack in UK. So you are investing in not only platforms but making a statement about our relationship,” he said.

Schriver was referring to Russia’s annexation of Ukraine’s Crimean Peninsula in 2014 and the nerve agent attack in March on former Soviet spy Sergei Skripal and his daughter in Britain.

Nevertheless, Washington would not begrudge Manila’s efforts at boosting its relations with Moscow as well as with Beijing, the US official said.

Schriver said the United States understood that the Philippines wanted a constructive relationship with Moscow and Beijing.

As early as November 2016, just a few months after Mr. Duterte assumed the presidency, Moscow had already expressed its desire to build stronger partnership and friendship, not a military alliance, with Manila.

Russian Ambassador Igor Khovaev then said Moscow was looking at supplying arms and transfer technology to the longstanding US ally.

Mr. Duterte flew to Moscow for talks with Russian President Vladimir Putin in May last year but cut short his visit after Islamic State-inspired militants laid siege to Marawi City, which sparked a five-month war that devastated the Islamic city.

On Oct. 24, 2017, several days after President Duterte announced the liberation of Marawi “from terrorist influence,” the Philippines and Russia signed a military technical cooperation agreement that would allow the two countries to conduct joint research, production support and possibly exchange experts and training personnel.

The donation arrived on the Russian antisubmarine ship Pantaleev, which was on a visit to Manila.

President Duterte has been pivoting toward Russia and China as he veered Manila away from Washington, which he had accused of hypocrisy and bullying for criticizing his brutal war on drugs.