WWII prisoners buried as unknowns in Hawaii get memorial marker 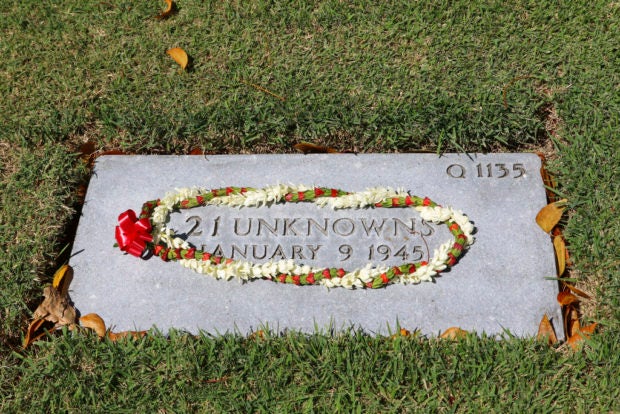 A grave with the unidentified remains of Allied prisoners of war killed on board the Japanese ship Enoura Maru in 1945 is decorated with a flower lei at the National Memorial Cemetery of the Pacific in Honolulu on Wednesday, Aug. 15, 2018. Dozens of relatives of Allied servicemen who were killed in January 1945 as prisoners of war held by Japan dedicated a memorial stone to their loved ones at the cemetery. (AP Photo/Audrey McAvoy)

HONOLULU — Nancy Kragh grew up without her father, who was among 400 prisoners of war killed when a ship taking them from the Philippines to Japan was bombed.

On Wednesday, she and other family members of prisoners on that ship dedicated a memorial stone to their loved ones. The marker lies within a national cemetery in Honolulu where the men are buried in 20 separate graves as “unknowns.”

Kragh only learned her father, Army Maj. Clarence White, was buried in Hawaii about 15 years ago thanks to research conducted by the son of another prisoner of war. The ceremony, she said, brought to close a long journey of finding her father’s final resting place.

“I can think of him as here, rather than in a mass grave or in the ocean somewhere,” she said after the ceremony at The National Memorial Cemetery of the Pacific.

The men were on board the Japanese freighter Enoura Maru in what is now Kaohsiung, Taiwan, when planes from the USS Hornet aircraft carrier bombed it on January 9, 1945. The Enoura Maru, which was en route from the Philippines to Japan, hadn’t been marked as having POWs on board so the pilots didn’t know they were attacking some of their own.

The 400 were initially buried in a mass grave near the harbor. The U.S. military retrieved the remains in 1946 and sent them to Hawaii for burial.

The group includes not just Americans but also Australians, Canadians, British, Norwegians and citizens of what is now the Czech Republic.

The conditions on the ships transporting the prisoners were so horrific the Americans called them “hellships.”

U.S. Army Air Corps veteran Daniel Crowley, who traveled to Hawaii from Simsbury, Connecticut, to attend the ceremony, endured more than three years of slave labor as a prisoner of war, including time on ship similar to the Enoura Maru.

The 96-year-old recalls being held below deck in such cramped conditions he could only squat — not lie down or stand. The prisoners had to defecate and urinate where they were, leaving their waste to cascade down to platforms below where more prisoners were held.

“You were showered constantly,” he said.

Their captors lowered rice to them once a day in a bucket that had earlier held excrement. The prisoners had to reach into the bucket for their share. Sometimes the men fought.

“Some men lost it completely and sank their teeth into the nearest person for liquid. They wanted a drink. There was no water ration,” Crowley said.

Each day they’d collect those who had died and throw them over the side of the ship. That was actually a good job to have, Crowley said, because it meant you could get fresh air.

Crowley’s ship took 17 days to reach Japan from the Philippines after taking a circuitous route to avoid attacking U.S. planes.

Crowley spent the rest of the war working in two different copper mines in Japan.

After the war, he found a stigma followed those who had been prisoners of the Japanese military. Major companies wouldn’t hire them. His older brother told him not to tell anyone he was a former prisoner of war.

“They felt you couldn’t be mentally balanced if you had been through this nightmare,” he said. Crowley made a living in sales by commission.

He counts himself lucky to have survived.

He said it was important to recognize the men who lost their lives on the Enoura Maru.

“These are men from the United States Armed Forces who were ignominiously thrown in a pit without marking by the country, our country,” Crowley said. “It was a sad thing that they were never recognized before they were buried together in a mixed-up grave with no marker.”   /kga