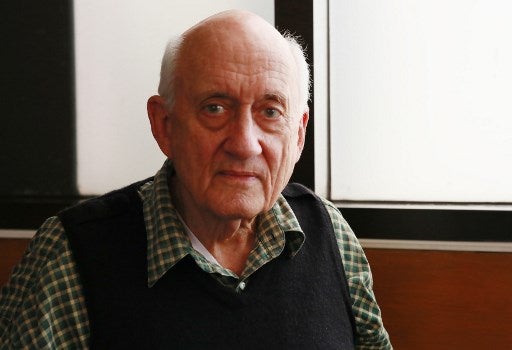 Australian professor Gill Boehringer, 84, poses for a photo inside the airport’s day room at the international airport in Manila on August 14, 2018. AFP

An Australian professor left the Philippines on Tuesday, nearly a week after being barred entry and placed in limbo at an airport in what rights groups say was part of a crackdown on critics of President Rodrigo Duterte.

The Philippine government said Gill Boehringer, 84, was put on a blacklist for allegedly violating laws barring foreigners from engaging in political activities after he attended a protest in 2015.

“I am not a terrorist. I am a human rights defender,” Boehringer said in a video message recorded on Monday in an airport exclusion room where he had been staying since his arrival last week.

He was the latest foreigner ordered out of the Philippines following Australian Catholic nun Patricia Fox, who has been fighting deportation since April after drawing Duterte’s ire.

After winning the presidential election in 2016, the Philippine leader launched an unprecedented campaign against illegal drugs that has left thousands dead and sparked allegations of extrajudicial killings and human rights violations.

The defiant Duterte has lashed out at foreign critics of his drug war — including the International Criminal Court’s chief prosecutor and United Nations rights experts — and personally ordered the arrest of Fox in April.

Like Fox, Boehringer had joined a fact-finding mission looking into alleged rights violations in the southern Philippine region of Mindanao where Duterte had declared martial law, said Maria Sol Taule, the professor’s lawyer.

“This is the concerted handiwork of a defensive and paranoid government,” Philippine rights group Karapatan said in a statement, and opposition congressman Carlos Zarate described Boehringer’s expulsion as “alarming”.

Manila denied Boehringer’s expulsion was part of a crackdown on critics, saying the policy against foreigners’ participation in politics was “nothing new”.

“If they (foreigners) have issues or concerns about how the government is being handled, there are other ways of expressing their opinions, other more peaceful ways,” Dana Sandoval, a Bureau of Immigration spokeswoman, told AFP. /ee