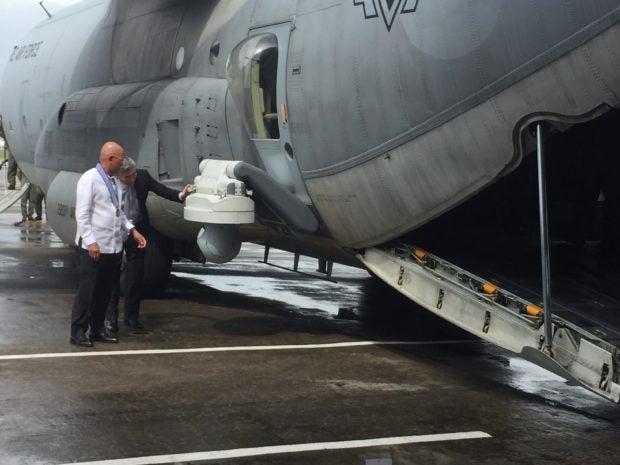 Defense Secretary Delfin Lorenzana (left) and US Ambassador Sung Kim inspect the surveillance sensor of the Sabir system mounted on the Air Force C-130 that was retrofitted for maritime patrol. INQUIRER.NET / FRANCES MANGOSING

The Air Force has retrofitted one of its cargo planes into a maritime patrol aircraft with the acquisition of a Special Airborne Mission Installation and Response (Sabir) system supplied by the United States.

The US on Tuesday turned over the P807-million worth platform to the Air Force in a ceremony in Villamor Air Base in Pasay City.

The Sabir system, fitted into one of the five C-130 planes, will boost the intelligence, surveillance and reconnaissance (ISR) missions of the Air Force.

“As we can see here, Sabir has been fitted from a C-130 aircraft of the Philippine Air Force which will transform into a sophisticated ISR platform without losing any of its capacity of basic air mobility,” Air Force chief Lt. Gen. Galileo Kintanar Jr. said in his speech. 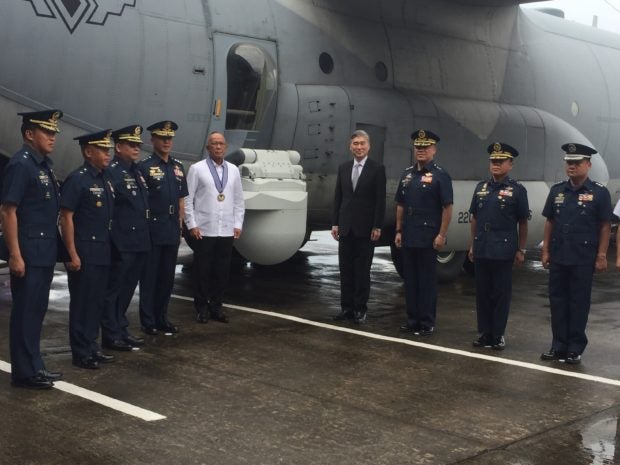 Some of the features of the system include: near real-time HD streaming, HD thermal image, low-light continuous zoom, long-range maritime surveillance up to 200 nautical miles and automatic tracking.

“It is capable of operating into different configurations: As a military cargo aircraft and more importantly, as a long-range surveillance and reconnaissance aircraft,” Kintanar said.

The acquisition of the system was part of the Maritime Security Initiative of the US in 2016, aimed at assisting Southeast Asian countries in maritime security, maritime domain awareness and other capabilities. Part of the program included electro-optical infrared and aperture radars and training support.

The aircraft will be based at the Mactan Air Base in Cebu and will be operated by the 300th Air Intelligence and Security Wing.

US Ambassador to Manila Sung Kim said the new capability would also “increase the interoperability of the two militaries and contribute greatly to the security of the citizens in the country.”

Aside from the West Philippine Sea dispute, the Philippines is also facing security challenges like terrorism and communist insurgency. It is also vulnerable to natural disasters like typhoons and earthquakes.

Kim says that aside from border patrols, the Sabir can be used for various missions like humanitarian assistance and disaster response and counterterrorism.

Defense Secretary Delfin Lorenzana, meanwhile, expressed his gratitude to the United States for “filling in the gap” in the ISR capabilities of the Philippine military.

“For the longest time, I think the gap we have in the AFP are our ISR capability and we thank the US for filling in the gap,” he said.

“This is very important since I foresee the Air Force in future operations playing a much bigger role,” he added.

Lorenzana cited the Marawi siege last year, which he said the Air Force “played a very big role to liberate the city from terrorists.”

He said the government would be acquiring more C-130s, adding that one more could be dedicated for maritime patrol.

“We are acquiring several more C-130s. It is our wish we can have one C-130 dedicated for this purpose only,” he said.

The US previously donated six Scaneagle unmanned aerial vehicles and two Cessna-208B Caravan planes, which were also a big boost to the ISR operations of the Philippine military.

“Our defense relations with US cannot be measured with what is tangible but the people-to-people relationship we have developed through many, many years. Our bonds have stood the tests of time and I look forward to future engagements with counterparts,” Lorenzana said. /cbb, je

Read Next
Duterte OK to cancel visit if activists convince Israel PM – Palace
EDITORS' PICK
Harnessing technology for quality education
Tips for a cheerful life
Duterte: When I said I will fight drugs in 6 months, I thought it was like in Davao
Another joke? Duterte mulls return of Balangiga bells to keep US away
Connect to PH’s fastest network with new Signature Plan Lite at only P599 per month
Duterte’s SONAs: From wishing to resign to saying he’s inutile
MOST READ
Duterte acclaims Sotto: ‘He can become a good vice president’
Hidilyn shoots not only for gold but also for permanent place in PH sports history
Duterte’s SONAs: From wishing to resign to saying he’s inutile
Go to war with China over West PH Sea? It will be a ‘massacre’, says Duterte
Don't miss out on the latest news and information.