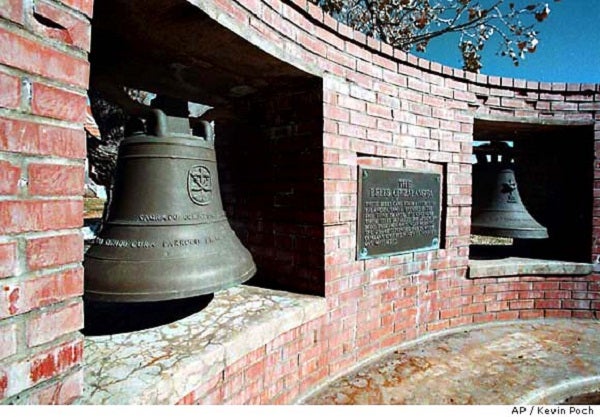 This May 2001 photo shows the two bells of Balangiga at F.E. Warren Air Force Base outside Cheyenne, Wyoming, that signaled an attack by Filipino insurgents on occupying American troops in 1901. The arrival of President Benigno Aquino on an official visit to the US raises the possibility that the State Department will announce plans to return of the war-trophy Bells of Balangiga to that country. AP

CHEYENNE, Wyo. — Elected officials from Wyoming said they oppose plans to return church bells seized as war trophies from the Philippines over a century ago.

Two of the Bells of Balangiga are at F.E. Warren Air Force Base in Cheyenne, Wyoming. The third is with the U.S. Army in South Korea.

Wyoming’s all-Republican congressional delegation said the bells are memorials to American war dead and should not go back to the Philippines.

Delegation staffers said the Defense Department notified Congress over the weekend of the plan to return the bells.

U.S. Army soldiers took the bells after an attack killed 48 American troops in 1901, during the American occupation of the Philippines.

Filipinos revere the bells as symbols of national pride. Philippine President Rodrigo Duterte has repeatedly called for their return.   /kga