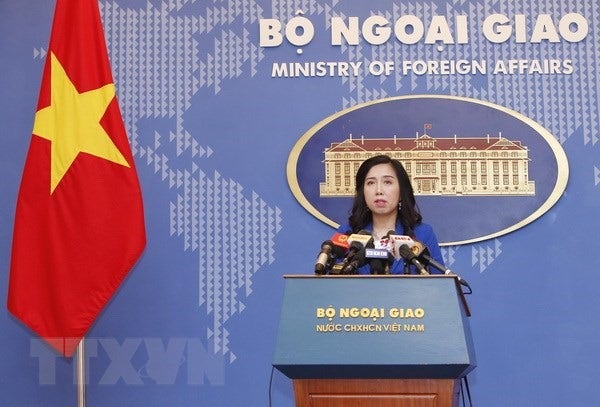 HANOI — Vietnam resolutely objects to China’s recent activities in the Hoang Sa (Paracel) archipelago and reiterated Vietnam’s sovereignty over the islands, according to the Ministry of Foreign Affairs’ spokeswoman Le Thi Thu Hang.

Hang made the remarks in response to reporters’ questions regarding China’s recent activities in the area, including celebrations marking six years of the so-called “Sansha city” and installing wave monitoring devices on Phu Lam Island. Meanwhile, China Central Television’s (CCTV) children’s channel recently organised a reality TV show for kids on the Hoang Sa archipelago. The Sun Yat-sen University of China also conducted a series of scientific surveys on the Hoang Sa islands.

“The aforementioned actions of China have not only seriously violated Vietnam’s sovereignty over the Hoang Sa and Truong Sa archipelagos but also run counter to the agreement on basic principles guiding the settlement of sea-related issues between the Socialist Republic of Vietnam and the People’s Republic of China; do not conform to the important common perceptions of the two countries’ senior leaders on controlling sea-related disagreements; as well as disobey the solid development trend of bilateral relations.”

She added that these actions are also “contrary to the spirit and content of the Declaration on the Conduct of Parties in the East Sea (DOC) and do not benefit the negotiations between Asean and China on a Code of Conduct in the East Sea (COC), as well as the maintenance of an environment of peace, stability, cooperation, and development in the East Sea and the region.”

“Vietnam resolutely opposes these actions and demands China immediately stop the aforementioned activities; respect Vietnam’s sovereignty over the Hoang Sa and Truong Sa archipelagoes; seriously implement the agreement on basic principles guiding the settlement of sea-related issues between the Socialist Republic of Vietnam and the People’s Republic of China, along with the DOC; not continue actions that complicate the situation; and practically and actively contribute to developing the friendship and comprehensive co-operation between Vietnam and China for the sake of peace, stability, and co-operation in the East Sea and the region,” the spokeswoman said.