South Korea has the most effective e-governance in Asia 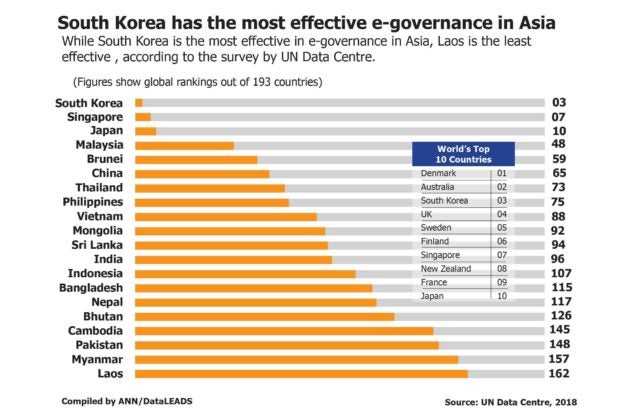 NEW DELHI — South Korea is most effective in e-governance in Asia while Laos the least effective, according to the recent survey by UN Data Center.

According to the UN report, the e-government survey measures e-government effectiveness in the delivery of public services and identifies patterns in e-government development and performance.

South Korea with an index of 0.90 leads in Asia in providing government services and information through the internet. It ranks 3rd globally after Denmark and Australia. According to the South Korean Ministry of Interior and Safety “South Korea’s e-government initiatives, including Gwanghwamun 1st Street, a public forum for citizens, and the Cheong Wa Dae petition website were instrumental in pushing South Korea to the top of the ranks.”

Singapore ranks second in Asia and 7th globally with an index of 0.88.  The smart technologies used by the country to share environmental data with the government and the public are one of the many e-governance initiatives in the country responsible for its ranking.

Thailand is ranked seventh in Asia and 73 globally with an index of 0.65. It jumped four places up this year.  It is followed by Philippines, Vietnam, Mongolia and Sri Lanka.

India is ranked 96 globally with an index of 0.56. It has jumped 11 places up this year. It is followed by Indonesia, Bangladesh and Nepal. Bhutan, Cambodia and Pakistan.

Myanmar and Laos with an index of 0.33 and 0.30 respectively are ranked lowest in Asia.

According to the Survey, the three most commonly used online services in 2018 are utilities payment, submission of income taxes, and registration of new businesses.