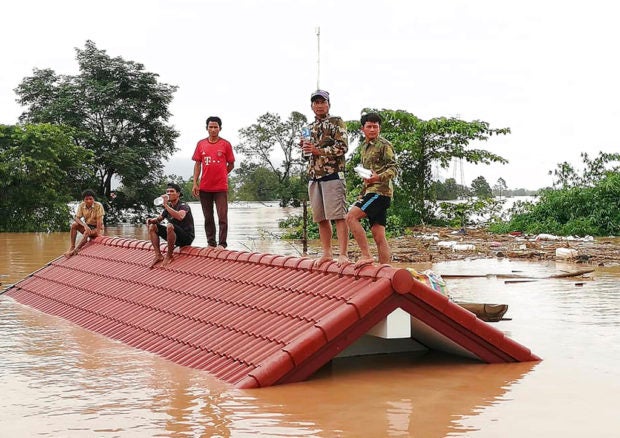 Villagers take refuge on a rooftop above flood waters from a collapsed dam in the Attapeu district of southeastern Laos, Tuesday, July 24, 2018. The official Lao news agency KPL reported Tuesday that the Xepian-Xe Nam Noy hydropower dam in Attapeu province collapsed Monday evening, releasing large amounts of water that swept away houses and made more than 6,600 people homeless. (Attapeu Today via AP)

The Philippine government has extended its sympathies to Laos after a hydroelectric dam collapse that left dozens dead and hundreds missing.

“Our thoughts are with the government and people of Laos as they cope with this tragedy,” Cayetano said in a statement on Wednesday.

“We hope and pray for the safe recovery of the many who were reported missing,” the Foreign Affairs secretary added.

Cayetano, quoting a report from the Philippine Embassy in Vientiane, said the dam collapsed as a result of heavy monsoon rains.

Following the collapse, the dam sent millions of tons of water rampaging down at least six villages in Attapeu.

Belinda Ante, Philippine ambassador to Vientiane, said they are in touch with the Filipino community in the affected areas, located 584 kilometers southeast of the capital.

“Only 10 of the 28 Filipinos registered with the Embassy are still in the area but all are safe and have not been affected by the flooding,” Ante said, as quoted by Cayetano.  /muf