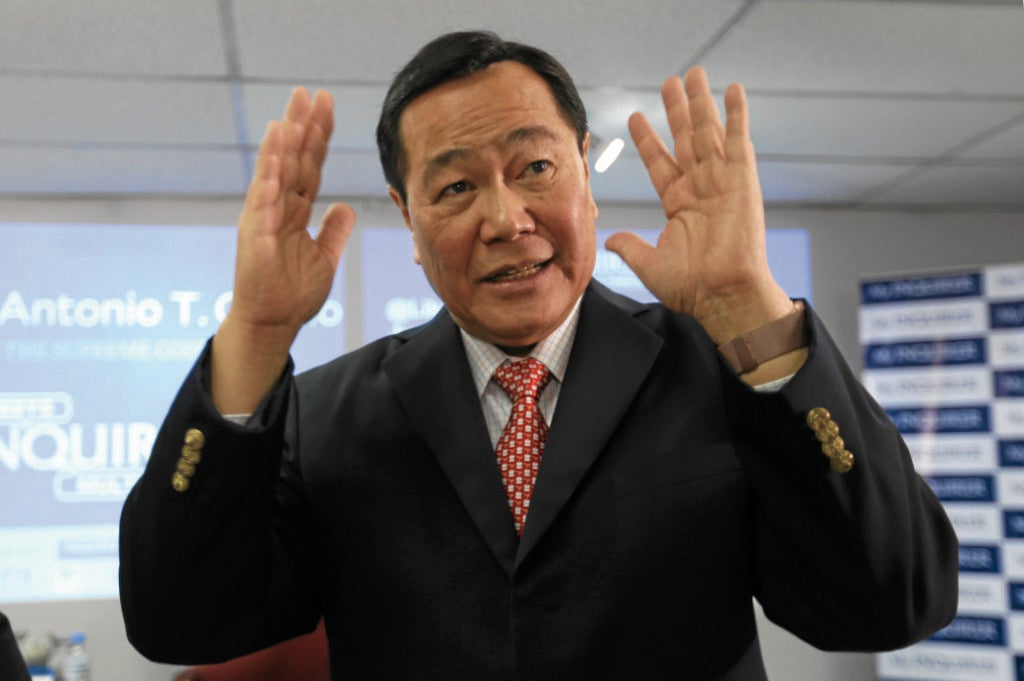 President Duterte should spell out in his State of the Nation Address (Sona) on Monday his strategy on the territorial dispute with China after a Social Weather Stations (SWS) poll found that 9 of 10 Filipinos wanted the Philippines to recover its islands in the West Philippine Sea that Beijing had seized, acting Chief Justice Antonio Carpio said on Sunday.

“I think this is a message to the Duterte administration that they have to listen to the people and that they cannot set aside the arbitral ruling,” Carpio said.

“This is really overwhelming. The Filipino people don’t buy the appeasement policy that if we enforce the arbitral ruling, it means war [with China],” he said.

“They have to take immediate steps to enforce the ruling. It cannot be delayed because the people are already aware of their sovereign rights in the West Philippine Sea. They don’t want it to be shelved,” he added.

Carpio was referring to the July 12, 2016, ruling of the UN-backed Permanent Court of Arbitration in The Hague that invalidated China’s claim to nearly all of the South China Sea and recognized the Philippines’ sovereignty in the West Philippine Sea, waters within the country’s 370-kilometer exclusive economic zone (EEZ) in the heavily contested waterway.

The ruling came down two weeks after the President took office. But instead of seeking the international community’s help in enforcing the ruling, the President set it aside in exchange for aid, loans and investments from China.

On Saturday, SWS released the results of a poll showing that 87 percent of adult Filipinos believed it was important to recover Philippine-owned islands that Beijing had seized and transformed into military bases.

The poll, conducted from June 27 to 30, was consistent with the results of an earlier survey, which showed that 80 percent of Filipinos opposed the President’s stand on the territorial dispute with China.

On Sunday, presidential spokesperson Harry Roque said the administration agreed with the Filipinos’ desire to recover Philippine islands that had been seized by China.

“We are one with our people in seeking to assert our sovereign rights and territorial claims in the West Philippine Sea,” Roque said.

He said, however, that the Duterte administration would pursue those initiatives through dialogue with China.

“We have shifted to a conciliatory tack and friendly dialogue with China by employing a bilateral consultation mechanism to resolve issues while we build up our capability to monitor and defend our maritime interests,” he said.

Carpio will attend Monday’s joint session of Congress, which the President will address for the third time since assuming office.

Cesar Pareja, secretary general of the House of Representatives, said on Sunday that Carpio had confirmed his attendance.

Asked if the President should discuss the territorial row in his speech, Carpio said: “Yes. It’s a pressing issue. It’s a very important issue because we are talking here of a huge maritime area larger that our total land area.”

“He should tell the Filipino people what’s his plan to enforce the ruling so that we will all know,” he said.

Carpio, a member of the legal team that won the arbitral ruling for the Philippines, said the Duterte administration should now focus on the second step in resolving the territorial dispute with China.

He said Manila had already won the maritime dispute against Beijing when the arbitral court acknowledged its EEZ as defined by the UN Convention on the Law of the Sea.

Carpio expressed confidence that the strong public opinion on the issue would further solidify the Philippines’ bid and prompt China to abandon its sweeping claim to the South China Sea, a strategic waterway through which $5 trillion in global trade passes yearly.

He said the increasing public awareness of the issue had also been happening in Vietnam, Malaysia and Indonesia, which also have overlapping claims in the South China Sea, home to islets, atolls and reefs believed to be sitting atop vast oil and gas deposits.

He added: “China should understand that the people of [Southeast Asia] who are prejudiced by their [sweeping claim] will not concede to [them]… That will be a big problem for China in the long term. So China must adjust its position because its position now is totally wrong.”

But is it still possible for the Philippines to get back the islands that China had seized without going to war?

“Yes, of course,” Carpio replied. “We have already won the maritime dispute. The next step is to [resolve] the territorial dispute.”

“As long as we don’t concede the sovereignty of these islands, the issue remains and this will hound China,” he continued. “And we have the support of the world’s naval powers, which are sailing [on] the high seas and in the EEZs.” —With reports from Julie M. Aurelio and Jerome Aning