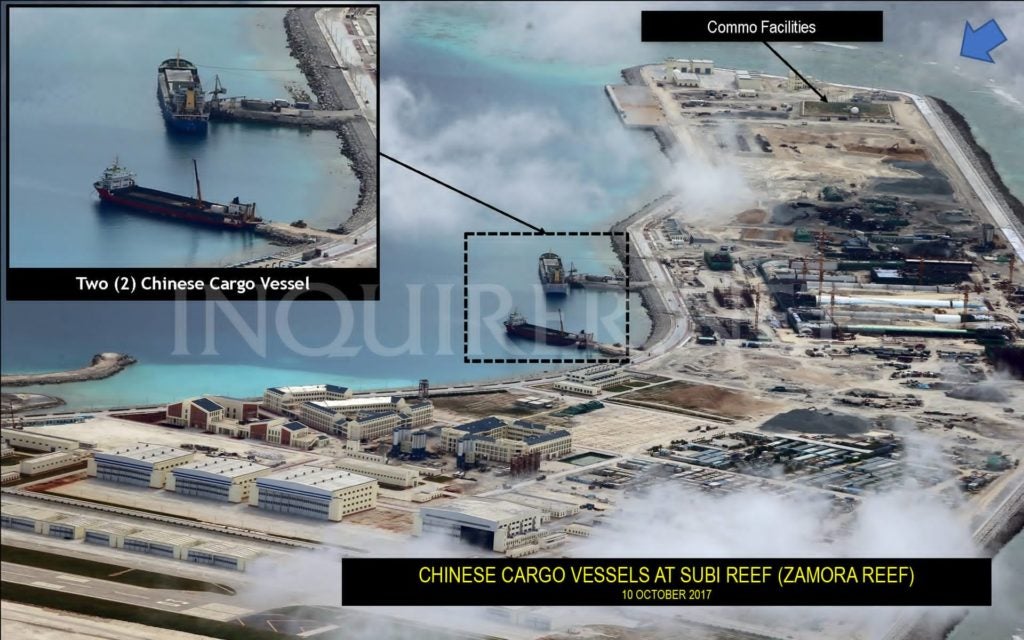 There is overwhelming support among Filipinos for getting back Philippine islands that had been seized by China in the West Philippine Sea, according to survey results released on Saturday.

The June 27-30 survey by the Social Weather Stations (SWS) showed 87 percent, or about nine of 10 adult Filipinos, believe it was important to regain control of the Chinese-held islands in the West Philippine Sea.

A majority of the respondents (69 percent) also believed that “China is afraid to face any court because they know that they are not on the side of justice.”

Only 8 percent disagreed with the statement, while 22 percent were undecided.

This yielded a net agreement score (percent agree minus percent disagree) of +61, classified by SWS as “very strong.”

Aerial photographs obtained by the Inquirer in February showed that China was almost finished transforming seven reefs claimed by the Philippines in the Spratly archipelago into island fortresses, in defiance of a ruling by the Permanent Court of Arbitration junking Beijing’s expansive claims over nearly the entire South China Sea, including areas within the Philippines’ 370-kilometer exclusive economic zone (EEZ).

The survey showed that the belief in the importance of reclaiming Philippine areas in the disputed waters was directly related to the respondents’ level of knowledge of the maritime conflict and related issues.

Among those who were aware of the West Philippine Sea conflict before they were polled, 93 percent believed in the importance of regaining control of the islands, more than the 62 percent of those who became aware of the issue only during the survey interview.

Similarly, those who already knew about specific issues in the West Philippine Sea – the reported Chinese abuses of Filipino fishermen, the government’s inability to prevent the Chinese from fishing in the Philippine waters, China breaking its promise not to militarize the area and China’s creation of artificial islands – gave higher levels of importance in regaining control of the China-occupied islands (ranging from 91 percent to 94 percent).

That figure was higher than those who were made aware of those issues only during the time of the survey (ranging from 78 percent to 83 percent).

The survey said 43 percent of the respondents don’t consider the Duterte administration’s failure to protest against China’s actions a form of treachery, while 29 percent believed it was.

Of those who believed that not protesting against China was a form of treachery, 55 percent were satisfied with the President’s performance against 28 percent who were dissatisfied for a +28 net satisfaction rating (correctly rounded).

He obtained a higher net satisfaction rating of +55 among those who believed that not protesting was not a form of treachery (71 percent satisfied against 16 percent dissatisfied).

In his Inquirer column on Saturday, SWS president Mahar Mangahas said the President’s “policy of noninterference with the Chinese moves into Philippine waters” affected his “very good” +56 net satisfaction rating in the first quarter.

Mangahas said the survey showed 81 percent of Filipinos said it was “not right to leave China alone” with its infrastructure and military presence in the Philippine-claimed territories; about 80 percent said it was right to strengthen the country’s military capability, especially the navy; and 74 percent said it was right to bing the dispute for negotiations in international organizations, like the United Nations or the Association of Southeast Asian Nations.

The survey showed that “liking the President’s performance and disliking his policy toward China are not inconsistent attitudes,” Mangahas said, noting Mr. Duterte’s “good” +44 net satisfaction rating among 81 percent of Filipinos who said it was “not right” to leave China alone to do what it wants.

“But it is +54 (or “Very Good”) among the one-fifth calling it a ‘right’ action. This suggests that he would have avoided the downgrade in his rating by acting more forcefully toward China,” Mangahas said.

The survey was conducted through face-to-face interviews of 1,200 adults and had a margin of error of plus-or-minus 3 points for national percentages.