Duterte not worried over China loans 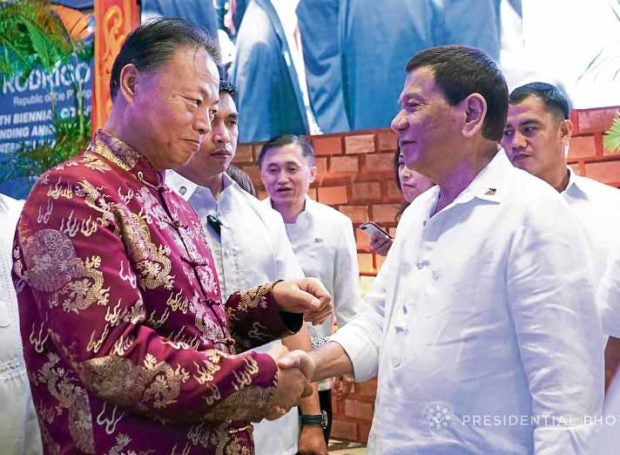 CHINA SUPPORT President Duterte greets Chinese Ambassador to the Philippines Zhao
Jianhua during a Chinese-Filipino business convention at Manila Hotel on Feb. 19. China has
rewarded the Duterte administration with loans and grants as the President builds closer ties
with the Asian economic powerhouse. —MALACAÑANG PHOTO

(Editor’s Note: President Duterte will deliver his third State of the Nation Address [Sona] on July 23. The Inquirer looks back at promises he made in Sona 2016 and Sona 2017, and how he and his administration performed on those promises. We will also look at major issues that marked his two years in office in our #Sona2018 series.)

Who’s afraid of borrowing money from China? Not the Philippines under President Duterte, though economic managers have stressed that there will be careful discussions on foreign loan agreements and financing for massive infrastructure.

As President Duterte continues to build closer ties with China’s top leaders, his administration is being rewarded by Beijing with loans and grants to build new bridges, dams, irrigation facilities, as well as rail projects.

Just this week, the President himself attended the groundbreaking rites for the Binondo-Intramuros Bridge and the Estrella-Pantaleon Bridge across the Pasig River to be built with Chinese grants.

Mindful of the concerns about the so-called “Chinese debt trap,” Socioeconomic Planning Secretary Ernesto Pernia, the country’s chief economist, last month said the Philippines would be “even more cautious.”

“We are extra careful in having projects funded by China,” said Pernia, who is also head of the state planning agency National Economic and Development Authority.

So far, the Philippine government has acquired one loan from China amounting to P3.135 billion for the Chico River Pump Irrigation Project, the first flagship infrastructure project to be financed by Beijing under the administration’s ambitious “Build, Build, Build” program.

The $62.09-million loan will cover 72 percent of the total cost of the P4.372 billion project of the National Irrigation Administration. It carries a yearly interest of 2 percent and matures in 20 years, inclusive of a seven-year grace period.

In comparison, the first tranche of a loan from Japan International Cooperation Agency to build the Philippines’ first subway system carries an interest rate of only 0.1 percent and payable in 40 years, including a 12-year grace period. The 104.5-billion yen, or P51.3-billion, loan will finance the first phase of the P356.9-billion project.

In the often-cited Hambantota port in Sri Lanka that was reportedly acquired by China, Pernia said that it resulted from the loan’s conversion to equity.

“We don’t want that to happen to us, that we convert the loan to equity. We are trying to diversify as much as possible our funding sources to the extent that if we can handle that with local funds, we will do that,” he said, adding that South Korea was another potential source of funds.

The government has already approved 35 of the planned 75 “game-changing” flagship projects worth P1.243 trillion under “Build, Build, Build.” A separate program for 4,909 smaller-scale infrastructure projects would cost P10.6 trillion.

Finance Secretary Carlos Dominguez III, the head of the administration’s economic team, said Chinese loans would have no collateral unlike what other countries that supposedly fell into China’s “debt trap” had.

“It’s a sovereign debt,” he said. “We don’t owe anybody any collateral, and we are borrowing very prudently.”

Credit ratings are a measure of a government’s creditworthiness and serve as a proxy grade for the country’s economic performance.

Improved ratings would allow the government to demand lower rates from lenders, which could translate to lower interest for consumers and businesses borrowing from banks using government-issued debt papers.

Dominguez cited the country’s first-ever panda bond issuance of 1.46 billion yuan, or about P12 billion ($200 million), that had no collateral and with a “tight” yield of 5 percent.

Due to the good turnout, the government is looking at another round of panda bond sale by next year.

The Philippines may be borrowing more from China and its other development partners like Japan as well as multilateral lenders, such as the Asian Development Bank, the China-led Asian Infrastructure Investment Bank and the World Bank, but Dominguez said early this month that “given the rapid expansion of our GDP [gross domestic product], we will certainly outgrow our debt.”

Economic managers are targeting an annual GDP growth at 7-8 percent starting this year until 2022, following a 6.7-percent expansion in 2017, which was among the fastest in emerging Asia.

“Those who raise the specter of a debt crisis arising from our use of official development assistance (ODA) to finance our infrastructure program are not reading the numbers well enough,” Dominguez said during a forum of the Cabinet’s economic development cluster early this month.

Dominguez said that with prudent debt management and the rapid expansion of the economy, the country’s debt-to-GDP ratio would decrease to 39 percent by 2022 from 42.1 percent last year.

However, foreign borrowings carry risks, according to the independent think tank, Ibon Foundation.

Ibon raised the alarm over the increased borrowings from China, among other lenders, as early as last year.

“Overreliance on debt is obviously problematic but by itself tapping concessional loans to build much needed infrastructure is not a wrong policy,” said Ibon’s Arnold Padilla.

He said most ODAs are offered “not by genuine development cooperation but by the narrow agenda of lending governments and the corporate interests they represent.”

The benefits for large infrastructure creditors like China and Japan not only come from the interest on their loans but largely from the conditionalities they tie to the agreements like requiring that goods and services for the projects be sourced exclusively from the lenders, Padilla said.

“Lenders dictate the technology, design and construction of the infrastructure to accommodate their own suppliers and infrastructure firms,” he said. This would position their nationals to corner the operation and maintenance contracts for the infrastructure, such as a rail line, he said.

The loans also create commercial opportunities for companies from the lender countries, he said.

In China’s case, infrastructure lending in poor countries is even used to create employment for their own workforce at the expense of local labor,” Padilla warned.