Duterte: China never asked for anything in exchange for aid to PH 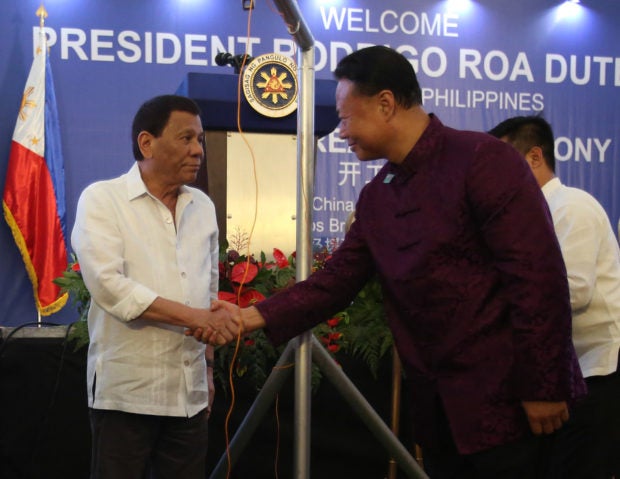 President Rodrigo Roa Duterte shakehands with Chinese Ambassador to the Philippines Zhao Jianhua during the groundbreaking ceremony of Estrella-Pantaleon Bridge and Binondo-Intramuros Bridge, the two China Grant-Aid bridges financed by the People’s Republic of China held in Intramuros Manila. PHOTO BY JOAN BONDOC

President Rodrigo Duterte claimed on Tuesday that China “never asked” for anything in exchange for its assistance to the Philippines.

“I just like to tell everybody that in all of these discussions, China never asked for any, not even a one square of real estate in this country,” Duterte said in a speech during the inauguration of the Binondo-Intramuros bridge, a project funded by a Chinese grant.

Chinese Ambassador to the Philippines Zhao Jianhua shared the stage with Duterte during the event.

Analysts and some lawmakers had earlier warned that the Philippines is headed for a debt trap after the government entered into Chinese loans to boost the administration’s P8-trillion infrastructure projects.

But in his speech in the same event, Zhao assured government that China’s grants “do not have any strings attached.”

“I would like to air China’s grants does not have any strings [attached] to them,” he said.

He assured the government would not fall into a debt trap.

“And China’s loans to financing infrastructure projects will not make the Philippines fall into a debt trap because under the wise leadership of President Duterte and the economic management team, headed by Secretary Dominguez, they are smart enough not to allow the Philippines to fall into the so-called debt trap,” he said.

“China will honor this commitment to make sure those projects will benefit the Filipino people, will not have any negative impact of the socioeconomic program of the Philippines,” he added.

During his speech, Duterte also thanked China for its generosity in funding the construction of the 506.46-meter Estrella-Pantaleon Bridge and the 734-meter Binondo-Intramuros Bridge.

The Department of Public Works and Highways hopes the two bridges would be accessible to the public by 2020.

“I am therefore directing the DPWH and the other agencies concerned to ensure that the construction of these bridges will be finished within 30 months or earlier. Maybe, the end of the year? Ah impossible,” Duterte said. /je

Read Next
Palace: Only Sinophobes will find docking of China ship objectionable
EDITORS' PICK
DILG to stranded workers: ‘Stay where you are’ until Luzon-wide quarantine is over
BREAKING: 1,075 people in PH has coronavirus disease – DOH
Style and music journeys with Claudia Barretto
UP-PGH wards for COVID-19 patients finished in 5 days
IATF: Food firms to operate with 50% of workforce during Luzon quarantine
Cebu City closes its borders
MOST READ
Tootsy Angara bares neighbor wanted them out of village
Pacquiao to seek probe on leaked private letter from Barangay Dasmariñas
Another doctor dies due to COVID-19 in Cebu City, doctor-husband critical
Lagman: Ban overseas deployment of Filipino medics, nurses for now
Don't miss out on the latest news and information.