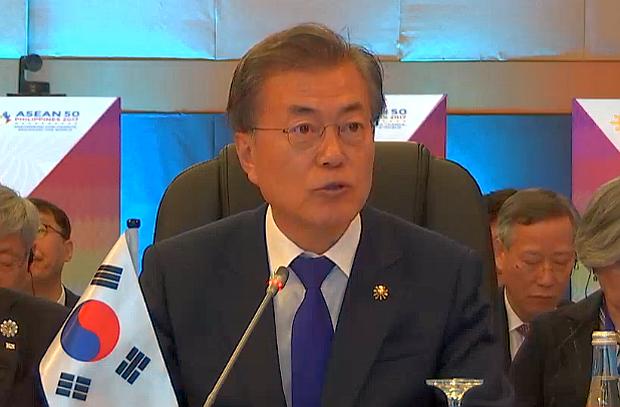 SINGAPORE — Asean can continue to play a constructive role in helping to usher in peace and stability on the Korean peninsula, South Korean President Moon Jae-in has said.

“It is necessary to create opportunities for North Korea to fulfil its role as a responsible member of the international community,” he said in a lecture on the final day of a state visit to Singapore.

“In the event North Korea carries out measures for denuclearization with sincerity, I hope that the North will be invited to the various consultative bodies run by Asean, and that bilateral exchanges and cooperation between Asean and the North will be strengthened.”

Mr Moon outlined how the grouping could help resolve the nuclear issue and bring about a deeply rooted peace on the Korean peninsula in his lecture titled “Republic of Korea and Asean: Partners for achieving peace and co-prosperity in East Asia”.

Held at the Orchard Hotel, it was part of the Singapore Lecture series hosted by the ISEAS – Yusof Ishak Institute, in which world leaders speak on global and regional affairs.

Mr Moon cited several Asean efforts which have kept North Korea in the fold of the international community. Since 2000, for instance, Asean has supplied a platform – the Asean Regional Forum (ARF) – for dialogue between Pyongyang and the international community. The ARF is the only multilateral forum which includes North Korea, and it has been a vital channel for communication, he said.

Asean has also consistently encouraged the North to give up its nuclear missile development program and choose the path tow-ards peace and prosperity, he added.

Mr Moon said Asean and North Korea also had a mutually beneficial economic relationship before tougher international sanctions were imposed on North Korea in response to its nuclear program.

The regional grouping also supported economic cooperation between the two Koreas by letting goods produced in their jointly run Kaesong Industrial Complex fall under the same tariffs as South Korean goods under the Korea-Asean Free Trade Agreement, he added.

“When international sanctions against the North are lifted, once North Korea carries out complete denuclearization, the once-vibrant economic cooperation between North Korea and Asean will be revived again,” he said.

Building on complete denuclearization and peace on the Korean peninsula, South Korea will draw up a new economic map and both Koreas will press on towards an economic community, he said.

He stressed that if the Korean peninsula achieved peace, Asia – including Singapore and Asean – would prosper greatly.

In his speech, Mr Moon laid out his vision of a road map to peace involving the United States, Japan, China and Russia, but acknowledged it would not be easy to achieve.

He said: “But if the agreements at the summit are implemented with sincerity, the goal can be achieved.

“If North Korea gives more substance to the implementation of denuclearization, and if South Korea and the US quickly take comprehensive corresponding measures, the whole process will accelerate.”

Later, during the question-andanswer session, Mr Moon agreed that working-level talks between North Korea and the US would not all be smooth sailing.

He described the agreement reached between US President Donald Trump and North Korean leader Kim Jong Un at their meeting in Singapore last month as a direct swop of North Korea’s complete denuclearisation for US security guarantees to the Pyongyang regime and the ending of their hostile relationship.

“There will be some difficulties at the working level to achieve the swop, especially the question of what comes first. I am aware it is a difficult process,” said Mr Moon.

But he made the case for the US-North Korea summit being different from other attempts at peace in the past, saying: “The two leaders met directly and made a promise to the international community.

“Even if there are some bumps and bruises at the working-level negotiations, these agreements will be adhered to in the end. If they do not keep the agreements, there will be repercussions from the international community,” Mr Moon added.