‘Time to reset the thinking of Philippine military’ 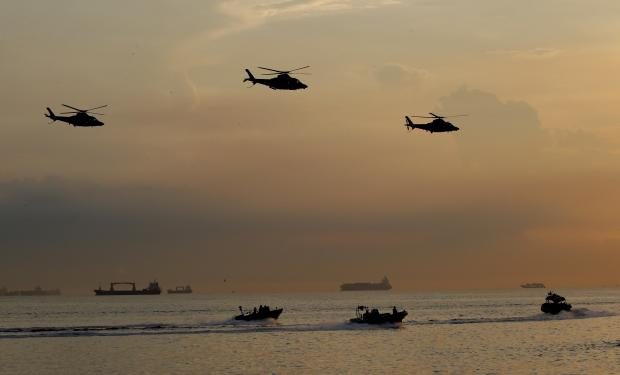 Philippine Navy helicopters and assault vessels simulate a rescue operation during the 120th anniversary celebration of the Philippine Navy, Tuesday, May 22, 2018. (Photo by BULLIT MARQUEZ / AP)

Amid growing concerns over the territorial disputes in the South China Sea, it’s a fine time for the top brass of the Armed Forces of the Philippines to go back to the drawing board and rethink their mindset in dealing with the country’s security problems.

“It’s about time to reset the thinking of the leadership in the military and look at the Navy and give it more importance,” said Marites Vitug, author of Rock Solid: How the Philippines Won Its Maritime Case Against China.

The author said she was able to interview Navy officers and former Navy chiefs for her upcoming book, which details the developments that led to the landmark ruling of the Philippines’ case vs. China over the South China Sea.

“While I was interviewing Navy officers and former Navy chiefs, what they kept saying was that the Philippine military did not give much priority to the Navy and that the mindset was very internal and was quite insular,” she said.

In the July 12, 2016 ruling on a case brought by the Philippines, the Permanent Court of Arbitration in The Hague declared invalid China’s claim to nearly the entire South China Sea.

Vitug was one of the speakers at a forum sponsored by the Stratbase- Albert del Rosario Institute on Thursday in time for the second anniversary of the ruling.

“[Western Command] in Palawan is given a little bit more of importance now but it still needs to be given more resources as they are in the forefront in the challenges in the West Philippine Sea,” she said.

While writing the book, one of the things she learned was Filipinos have a very low awareness of its maritime surroundings and the issues that arise from geography despite being one of the top 10 countries with the longest coastlines.

“Our government policies are dominated by land-based problems from infrastructure to security,” she said.

The Philippines has been facing an array of domestic and territorial security threats, including the maritime dispute in the South China Sea. There are currently about 22,000 Navy and Marine forces out of the 125,000-strong military, which is dominated by the Army.

Dr. Jay Batongbacal, director of the University of the Philippines Institute for Maritime Affairs and Law of the Sea, said the Philippine military is “one of the brighter spots” of the current administration.

While the AFP should continue its ongoing modernization program to deter threats to security, it should also keep its alliances with partner countries.

“We should take note that the Philippines, being a small country and a strategic location, we can’t rely on ourselves. It would be best to maintain and strengthen our alliances to address contingencies,” he said.  /muf