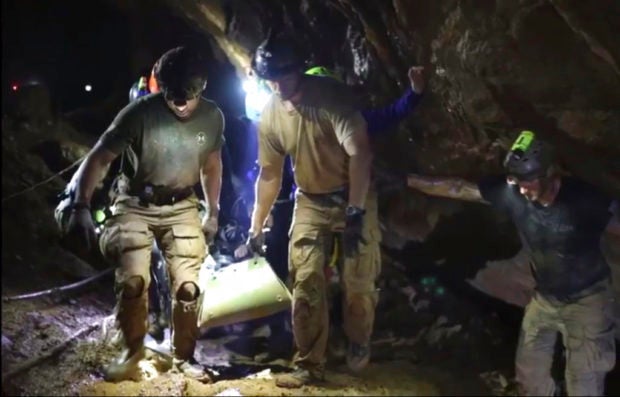 This undated photo from video released via the Thai NavySEAL Facebook Page on Wednesday, July 11, 2018, shows rescuers hold an evacuated boy inside the Tham Luang Nang Non cave in Mae Sai, Chiang Rai province, in northern Thailand. A daring rescue mission in the treacherous confines of a flooded cave in northern Thailand has saved all 12 boys and their soccer coach who were trapped deep within the labyrinth, ending a grueling 18-day ordeal that claimed the life of an experienced volunteer diver and riveted people around the world. (Thai NavySEAL Facebook Page via AP)

The Philippines on Friday joined the international community in rejoicing with Thailand after the daring rescue of 12 members of a boys soccer team and their coach in a flooded cave complex in the northern part of the country.

“We congratulate the Royal Thai Government for ensuring the successful recovery of the members of the team,” the Department of Foreign Affairs said in a statement.

All of members of the team were successfully rescued from the cave on Tuesday after being trapped there for 18 days.

“We also laud the many volunteers from Thailand and other countries for their heroic courage and tireless efforts to bring the group out to safety and reunite them with their loved ones,” DFA added.

The foreign affairs department also extended its condolences to the family of a former Thai Navy Seal diver who sacrificed his life during the rescue mission.   /muf