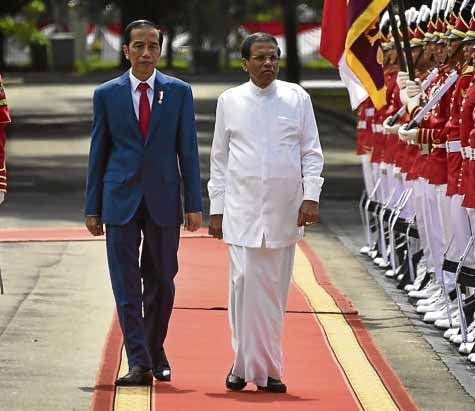 COLOMBO—Sri Lanka on Wednesday announced it would start hanging drug criminals, ending a half-century moratorium on capital punishment as officials promised to “replicate the success” of the Philippine antidrug war.

Since President Duterte’s coming to power in 2016, his brutal war on drugs has left thousands of people dead and prompted allegations of crimes against humanity.

Sri Lankan President Maithripala Sirisena told the Cabinet he “was ready to sign the death warrants” of repeat drug offenders and deploy the military to tackle drug crime, a government spokesperson said on Wednesday.

“From now on, we will hang drug offenders without commuting their death sentences,” Rajitha Senaratne said.

“We were told that the Philippines has been successful in dealing with this problem. We will try to replicate their success,” Senaratne said.

Sri Lanka has commuted death sentences for serious crimes to life in prison since 1976, when the last execution took place.

Senaratne said there were 19 drug offenders whose death sentences had been commuted to life. It was not clear if these offenders would be hanged under the government’s policy shift.

Amnesty International, however, urged Colombo not to press ahead.

“Sri Lanka must pull back from any plans to implement the death penalty and preserve its longstanding positive record on shunning this cruel and irreversible punishment,” the London-based rights group said in a statement.

But Sri Lankan authorities said a tougher approach was needed to combat what they described as an increase in drug-related crime.

Senaratne cited a case this week in which a convicted drug dealer, whose death sentence was commuted to life, had arranged the importation of 100 kilograms (220 pounds) of heroin from behind bars.

The government has not clarified how it will deploy military troops which have been used in the past to reinforce local police in riot control.

Apart from Sri Lankan President Sirisena, another Asian leader who has been apparently inspired by the Duterte administration’s brutal antidrug campaign is Indonesian President Joko “Jokowi” Widodo, who has called for the extrajudicial killing of suspected drug traffickers in the streets.

“Be firm, especially to foreign drug dealers who enter the country and resist arrest. Shoot them because we indeed are in a narcotics emergency position now,” Reuters quoted Widodo as telling law enforcers in July 2017.

President Duterte ran on a law-and-order platform that included promises to kill thousands of people involved in the drug trade, including officials.

The Philippine National Police has acknowledged killing more than 4,200 drug suspects who allegedly resisted arrest. But rights groups say the actual number of suspects killed is at least triple the PNP figure. —AFP