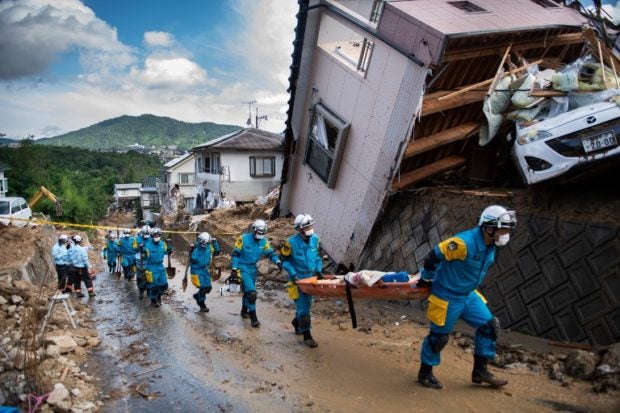 Police arrive to clear debris scattered on a street in a flood hit area in Kumano, Hiroshima prefecture on July 9, 2018. Rescue workers in Japan battled on July 9 to reach residents trapped after devastating rains that have killed at least 75 people, as authorities warned about the risk of landslides. AFP

President Rodrigo Duterte is offering assistance to rain-devastated Japan, where at least 140 people have died and many others are missing due to flooding and landslides.

Presidential Spokesperson Harry Roque said Duterte made the announcement during the 27th Cabinet meeting in Malacañang on Monday.

“[The Philippines] is offering Pinoy soldiers, including engineers and doctors, to help rescue and rehabilitation efforts” of areas hit by flooding and landslides following days of heavy rainfall, Roque quoted Duterte.

He said the government would also send medicines to Japan.

READ: Toll in Japan rain rises to 122, as hope for survivors fades

Duterte last visited Japan in October 2017 to “further enhance the strong bilateral relations between the Philippines and Japan.” /cbb