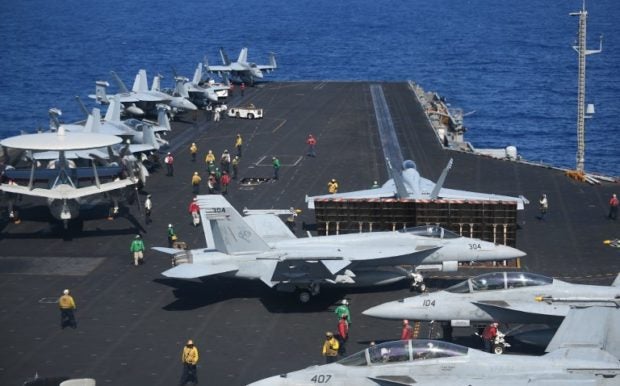 Sailors prepare FA-18 Hornet fighter jets for take off during a routine training aboard the US aircraft carrier Theodore Roosevelt in the South China Sea on April 10, 2018. (File photo from AFP)

President Rodrigo Duterte may have chosen to set aside an international tribunal ruling that invalidated China’s claim to nearly all of the South China Sea, but the world’s naval powers are enforcing it, according to acting Chief Justice Antonio Carpio.

“There is clearly enforcement of a core part of the award by the world’s naval powers, even if there is inexplicable reluctance on the part of the Duterte administration to enforce the award,” Carpio said on Monday at a forum in Manila ahead of the second anniversary of the July 12, 2016, ruling by the Permanent Court of Arbitration in The Hague.

Ruling on a case brought by the Philippines, the court declared China’s claim to nearly 90 percent of the South China Sea invalid under international law and said Beijing violated Manila’s sovereign right to fish and explore for resources in the West Philippine Sea, waters within the Southeast Asian nation’s 370-kilometer exclusive economic zone (EEZ) in the strategic waterway.

The ruling came down shortly after the President assumed office. Instead of seeking international help to enforce it, however, he put it on the back burner and traveled to Beijing to woo the Chinese for aid and investments.

To spice up his China courtship, the President declared an “independent” foreign policy, deemphasizing relations with the United States, the Philippines’ defense treaty ally, and reducing the size and scope of drills with the US military.

China responded with billions of dollars in investment pledges for the President’s infrastructure program, but proceeded to build artificial islands on seven Philippine-claimed reefs in the Spratly archipelago and develop them into military bases from which it could project its power throughout the region.

Closeup pictures published by the Inquirer earlier this year showed the Chinese bases were almost finished. Pleading military weakness, the Duterte administration has refused to protest the violation of Philippine sovereignty, not even after China landed military planes on the islands and deployed antiship missiles and surface-to-air missile systems on them.

The next step for China is expected to be the declaration of an air defense identification zone in the South China Sea, but Beijing is meeting opposition from world powers.

The navies of the United States, United Kingdom, France, Australia, Canada, India and Japan are sailing, and have been sailing, on the high seas and EEZs in the South China Sea to assert freedom of navigation, Carpio said.

The United States has sent aircraft carrier strike groups, including the USS Theodore Roosevelt and the USS Carl Vinson, sailing near China’s artificial islands, sending the message that it did not recognize Beijing’s claim of sovereignty to almost all of the South China Sea.

France, which has no claims in the waterway, sent an assault ship and a frigate through the Spratly Islands and around reefs that China wrested from the Philippines to push back against Beijing’s sweeping claim.

Japan, which has its own maritime dispute with China in the East China Sea, is stepping up its presence in the South China Sea with a two-month tour of the region and the Indian Ocean by a helicopter carrier beginning in September.

The air forces of the United States, Britain, Australia and Japan are flying, and have been flying, over the high seas and EEZs of the disputed waterway to assert freedom of overflight, Carpio said.

“These naval and air operations enforce the part of the award affirming the existence of high seas and EEZs in the South China Sea,” Carpio said.

The naval powers are doing the “heavy lifting” to enforce the Hague ruling despite the absence of support from the Philippines, the biggest beneficiary from the award, he said.

“It is now our duty to inform the Filipino people why the award is immensely beneficial to our national interest, and why every Filipino has a civic duty to preserve and protect the award so that the next administration can enforce the award,” Carpio said.

Former Solicitor General Florin Hilbay on Tuesday warned that shelving the Hague ruling could signal the country’s waiver of its rights in the West Philippine Sea.

“The general term I use is ‘waiver,’ meaning we’ll be back to the situation before the arbitration, or technically might be even worse,” Hilbay said at a foreign correspondents’ forum.

He said a waiver meant the country that was seen to have waived the ruling might be construed as recognizing the other country’s claim.  —With a report from Aie Balagtas See